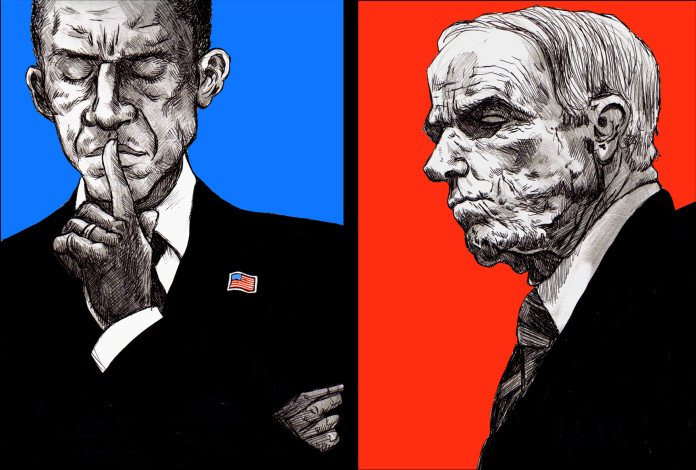 To most Americans and to many of us it was received wisdom that a democrat will win the US Elections in 2008. not anymore. Many analysts fear this may not happen. They point out while Clinton and Obama are destroying each other and the democratic party in a war of attrition, Republicans are making progress with an unquestioned leader, unifying political jargon and with the nuts and bolts of a successful campaign in place.

They may be right. But irrespective of who wins and who lands in the 18th century House on the Pennsylvania Ave, the Democratic campaign we have seen was special. It was special for it brought out the yearnings of a changed US society. Agreed, the primaries were mostly registered Democratic voters and not the whole America but nevertheless the impact of the economic and social movements of the last few decades, and the values that were espoused, were reflected in the kind of choices people made.

To begin with some one like Barack Hussein Obama surviving till the end was in itself a testament of the changed times; a tribute to a changing America. Hilary Clinton is not just a twice elected New York Senator, or the former first lady; in many respects she epitomises the sphinx of power, authority and continuity in the traditional American consciousness. I remember during the height of the Monica Lewinsky affair the joke used to be: fire the president and her husband too.

The mere fact that a coloured man, whose ancestry could be traced to a Muslim father, who from the beginning took a position against the Iraq war gave tough time to the Ms Clinton — that blue eyed scion of the American establishment — was in itself a little miracle in this age of profanity. But then it does not end here. Obama sustained the support of the white middle class delegates; which only serves to show that how among educated white Americans idealism, political belief and a shared sense of identity prevailed upon the traditional considerations of race and colour.

But there are even more interesting symptoms of a changing American society. My friend, Professor Adil Najam, currently at the Boston University, was explaining to me that how older American women identified with Hillary Clinton. To them she is the symbol of woman’s cumbersome struggle in a man’s world. Not anymore for the younger ones. Poll after poll, contest after contest, showed that how younger women — under 45 — swung towards Obama. They are the products of a fast emerging post-feminist America where issues and concerns transcend boundaries of gender.

But whereas the changing social dynamics of the US might have found their way into the political preferences, there is as yet little evidence of a similar adjustment to global concerns. Difficult questions persist.

Two ways of looking at this will be instrumental. In an article, “Can a Democrat change US Middle East Policy?” an excerpt from his updated book: “ Perilous Power: the Middle East and the US foreign policy” Noam Chomsky, argues that even someone like Obama is not up to any real change in foreign policy towards Middle East.

Chomsky was one of the most original American thinkers of his times. Since most of us are happy in imprisoning or exporting our own iconoclasts, we envied an America that can bear such self-flagellating critics in its midst. Even today we listen, read and cherish him but in a changed American context he is less relevant; to many on the campuses he is an academic of a bygone era and I am afraid not many on the campaign trail or on morning trains will care to read his arguments — however cogent they may appear to us.

Visakha N Desai, president of the Asia Society, however, refers to something which may be more understood. In a recent provocative article, “Questions for America’s next leader” she wonders how the next US president will provide a clear understanding of how he, or she, will prepare America for a twenty first century in which the local issues are tied with the global developments?

American ears may be deaf to what is perceived as Chomsky’s old fashioned rhetoric; but Desai is raising questions from the perspective of new market economy; she is concerned that the US election campaign by both the Democrats and the Republicans has not touched on the question or issue of US global responsibilities in an age when global trends can have local implications? And she is worried how America’s international authority will confront or adjust to Asia’s new found clout?

To their concerns I want to add mine. And contrary to Chomsky’s well rehearsed analysis and Desai’s own sophisticated market economy related thoughts I have a basic fundamental and dumb question; why is our fate being decided by the American voters?

Whether we like it or not, the US government for all practical purposes is a de-facto global government. Ok! The US has not designed it to be so but this is what the strange reality is. What will happen in Iraq, or Afghanistan; will there be a war with Iran; how will energy policies be developed; everything affects us. Yet a US president, elected primarily on the strength of local concerns, understandings and prejudices, will bring his or her team and together their decisions will affect the whole world; for good or bad they will control and shape our lives. Yet we — the people of the world — do not have the slightest input into who should win the primaries and who should sleep in the white House? Isn’t it funny?

Folks, I am not a poet, just someone wedded to the school of political realism. I am not condemning the current situation either; merely pointing to the sheer irrationality of a global power design. With United Nations dead or worse a rubber stamp, the term sole superpower is a mere euphuism for global government; yet the system for its selection is patently undemocratic and destabilising for the planet.

Every age throws up new problems and needs new solutions. The changed preferences of the democratic voters in the primaries reflected an admission of new realities inside the US; my question, like that of Vishakha N Desai, relates to a changed global reality, it may look irrelevant at this moment but with every passing year this will assume greater significance?