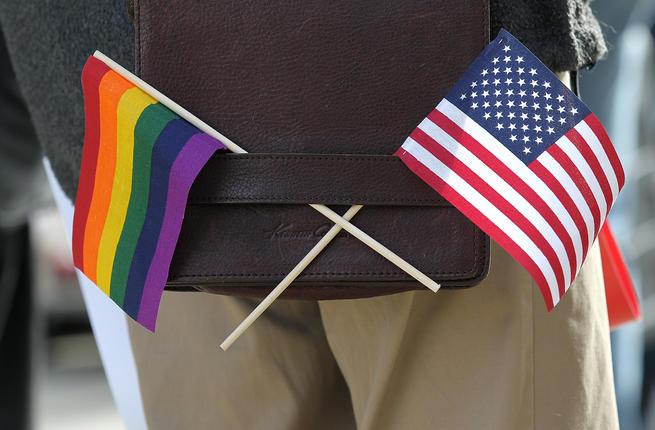 I think that ‘Baqir Sajid’s’ balanced and well argued position, which he has explained again, has not been understood by most on this forum. This is not a debate about the good & bad of gay and lesbians or transgenders but about the message US Embassy wants to send.

Baqir was clear from the very beginning that US Embassy is United States’s soverign territory and they can hold any kind of event which is permitted by their law and culture. Can they invite Pakistani gays and lesbians to such an event? I am not sure of the legality but then a significant percentage of Pakistani invitees to diplomatic events do consume alcohal on embassy premises and if that is fine (despite being against Pakistani law) then inviting Pakistani gay and lesbians will technically not be much different. What makes it different is that US embassy issues a press release about it on June 26th, Why? they don’t issue press releases about every single event and they don’t issue press releases saying that Pakistani invitees, some of whom serve in the government or media relished every drop of red and white wines and were falling over each other…so why issue a press release about the Gay & Lesbian event?

Because US embassy appears to be eager to be sending a message to Pakistani society and media that we stand by the gay and lesbians and in this regards we don’t respect Pakistan’s laws, whether they are based upon religion or derived from long standing local customs and traditions. And it is only natural to understand that they want to kick start a debate on this issue. What an American way to start a debate? It is also interesting that they have decided to do it at a time when we hear almost daily that relations between the two countries (or with military establishment; their historical partner in this region) are unusually strained. So much much so that the latest round of the Strategic Dialogue between US & Pakistan has been post poned indefinitely. Under these circumstances the US Embassy sending this kind of message, in clear, unambigous terms, is not only disappointing but very troubling.

Because they appear to be sending a clear, conscious, well thought out and robust message that we don’t respect Pakistani laws, conventions and traditions at all…and we don’t care a damn as to what Pakistanis think about our flagrant disrespect of their religon, laws and customs….I am not sure if they will hold such an event in Saudi Arabia or if they hold it they will issue a press release about it?

Why this is stupid? for so many reasons: first and foremost, it is a clear violation of the basis of diplomatic relations (as Baqir has so clearly pointed out, in his second email) and mutual respect for each other; Second, if widely known, it reduces US mission’s already strained good will & ability to undertake, handle and manage so many other important tasks which should be on the top of their prioritiy list in this region; it also unnecessarrilly polarizes the Pakistani civil society which is already polarized in so many different directions; it puts many like Baqir and myself who are great believers in US- Pakistan relations and United States important and vital role in this region into a difficult corner as to how to respond to this “stupidity” which unfortunately is clearly intended as a message; this isolates the genuine friends of United States and degrade (in the eyes of majority) all those Pakistanis into “stooges lacking self-respect” who for their friendship with the Americans will be forced to defend this action by giving one or other kind of excuse; it will empower all those who suspect that United States is actively working to spread “creative chaos” in Pakistan for some nefarious agenda and further marginalize & discredit those feeble voices of rationality that depend upon just and deserving support from the US foreign policy based on long established principles.

Finally this is also “stupid” becuase it shows the sheer inablity of US diplomatic missions & State Department baboos (since Embassy will not pull this kind of stupidity, unless a dumb ass from Washinton signalled that) to differentiate between relevant and irrelevant, theory and practice, possible and impossible; in simple words it exposes their intellectual poverty, lack of undertanding of this country and exposes the quality of their advisers here and in Washington. No doubt that current administration is taking a big and bold position on gay and lesbian rights within the US; but if US diplomats fail to understand Pakistan then one expects them to at least understand and respect the lessons of US history, where gay & lesbians have a difficult and painful struggle to their credit, which is still continuing. Unfortunately these kinds of mistakes happen when you take ‘stooges’ as friends. The human temptation to fall for psycophancy is huge; US dips and experts, despite a massive advantage in terms of education and resources are falling for the advice of those clever voices who specialize as “His Masters Voice”…I sincerely hope that the US diplomats here and their “fanatic bosses” back in Washington will care to understand the sensitives of this country, and will not like to unnecessarrily provoke their intellectual other halfs ie “Pakistani fanatics” to harm the lives of Pakistani gays and lesbians and all those who believe in the vital role of United States in this region…unless you want to spread more chaos here??