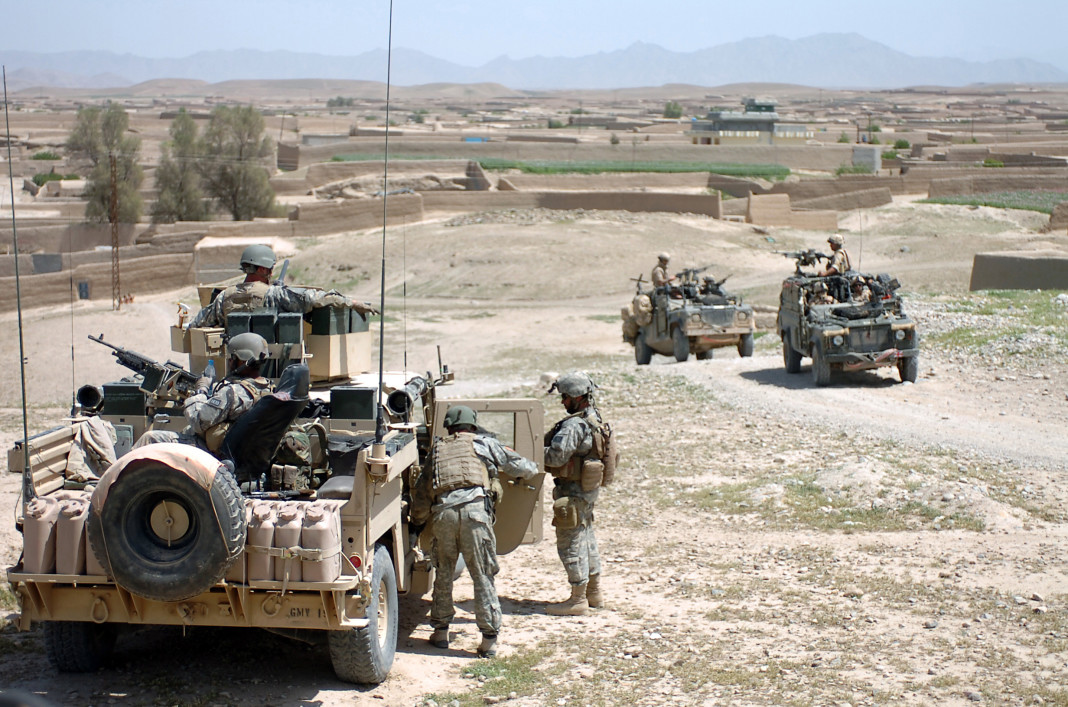 NEW YORK (Reuters) – When President Barack Obama cited cost as a reason to bring troops home from Afghanistan, he referred to a $1 trillion price tag for America’s wars. Staggering as it is, that figure grossly underestimates the total cost of wars in Iraq, Afghanistan and Pakistan to the U.S. Treasury and ignores more imposing costs yet to come, according to a study released on Wednesday.

The final bill will run at least $3.7 trillion and could reach as high as $4.4 trillion, according to the research project “Costs of War” by Brown University’s Watson Institute for International Studies. (http://www.costsofwar.org)

In the 10 years since U.S. troops went into Afghanistan to root out the al Qaeda leaders behind the September 11, 2001, attacks, spending on the conflicts totaled $2.3 trillion to $2.7 trillion. Those numbers will continue to soar when considering often overlooked costs such as long-term obligations to wounded veterans and projected war spending from 2012 through 2020. The estimates do not include at least $1 trillion more in interest payments coming due and many billions more in expenses that cannot be counted, according to the study.

In human terms, 224,000 to 258,000 people have died directly from warfare, including 125,000 civilians in Iraq. Many more have died indirectly, from the loss of clean drinking water, healthcare, and nutrition. An additional 365,000 have been wounded and 7.8 million people — equal to the combined population of Connecticut and Kentucky — have been displaced. “Costs of War” brought together more than 20 academics to uncover the expense of war in lives and dollars, a daunting task given the inconsistent recording of lives lost and what the report called opaque and sloppy accounting by the U.S. Congress and the Pentagon.

The report underlines the extent to which war will continue to stretch the U.S. federal budget, which is already on an unsustainable course due to an aging American population and skyrocketing healthcare costs. It also raises the question of what the United States gained from its multitrillion-dollar investment. “I hope that when we look back, whenever this ends, something very good has come out of it,” Senator Bob Corker, a Republican from Tennessee, told Reuters in Washington. SEPT 11, 2001: THE DAMAGE CONTINUES

What followed were three wars in which $50 billion amounts to a rounding error. For every person killed on September 11, another 73 have been killed since.

Was it worth it? That is a question many people want answered, said Catherine Lutz, head of the anthropology department at Brown and co-director of the study. “We decided we needed to do this kind of rigorous assessment of what it cost to make those choices to go to war,” she said. “Politicians, we assumed, were not going to do that kind of assessment.” The report arrives as Congress debates how to cut a U.S. deficit projected at $1.4 trillion this year, roughly a 10th of which can be attributed to direct war spending. What did the United States gain for its trillions? Strategically, the results for the United States are mixed. Osama bin Laden and Saddam Hussein are dead, but Iraq and Afghanistan are far from stable democracies. Iran has gained influence in the Gulf and the Taliban, though ousted from government, remain a viable military force in Afghanistan. “The United States has been extremely successful in protecting the homeland,” said George Friedman, founder of STRATFOR, a U.S.-based intelligence company. “Al Qaeda in Afghanistan was capable of mounting very sophisticated, complex, operations on an intercontinental basis. That organization with that capability has not only been substantially reduced, it seems to have been shattered,” Friedman said. Economically, the results are also mixed. War spending may be adding half a percentage point a year to growth in the gross domestic product but that has been more than offset by the negative effects of deficit spending, the report concludes.

COMPREHENSIVE STUDY Some U.S. government reports have attempted to assess the costs of war, notably a March 2011 Congressional Research Service report that estimated post-September 11 war funding at $1.4 trillion through 2012. The Congressional Budget Office projected war costs through 2021 at $1.8 trillion. A ground-breaking private estimate was published in the 2008 book “The Three Trillion Dollar War,” by Linda Bilmes, a member of the Watson Institute team, and Nobel-winning economist Joseph Stiglitz. That work revealed how much cost was added by interest on deficit spending and medical care for veterans. The report draws on those sources and pieces together many others for a more comprehensive picture. The report also makes special note of Pakistan, a front not generally mentioned along with Iraq and Afghanistan. War has probably killed more people in Pakistan than in neighboring Afghanistan, the report concludes. Politicians throughout history have underestimated the costs of war, believing they will be shorter and less deadly than reality, said Neta Crawford, the other co-director of the report and a political science professor at Boston University. The report said former President George W. Bush’s administration was “shamelessly politically driven” in underestimating Iraq war costs before the 2003 invasion. Most official sources continue to overlook costs, largely because of a focus on just Pentagon spending, Crawford said. “Over the last decade, we have spent a trillion dollars on war,” Obama said in last week’s speech on reducing U.S. troop levels in Afghanistan. At the very least, he was rounding down by $200 billion to $300 billion, when counting U.S. congressional appropriations for the post 9/11 wars.

“I don’t know what the president knows, but I wish it were a trillion,” Crawford said. “It would be better if it were a trillion.” ELUSIVE NUMBER. In theory, adding up the dollars spent and lives lost should be a statistical errand. The U.S. Congress appropriates the money, and a life lost on battlefield should have a death certificate and a casket to match. The team quickly discovered, however, the task was far more complicated. Specific war spending over the past 10 years, when expressed in 2011 dollars, comes to $1.3 trillion, the “Costs of War” project found. When it comes to accounting for every dollar, that $1.3 trillion is merely a good start. Since the wars have been financed by deficit spending, interest must be paid — $185 billion of accumulated so far. The Pentagon has received an additional $326 billion to $652 billion beyond what can be attributed to the war appropriations, the study found.

Homeland security spending has totaled another $401 billion so far that can be traced to September 11. War-related foreign aid: another $74 billion.

Then comes caring for U.S. veterans of war. Nearly half of the 1.25 million who have served in uniform in Iraq and Afghanistan have used their status as veterans to make health or disability claims at an expense of $32.6 billion to date.

Those costs will soar over the next 40 years as veterans age. The report estimates the U.S. obligations to the veterans will reach $589 billion to $934 billion through 2050. So far, those numbers add up to a low estimate of $2.9 trillion and a moderate estimate of $3.6 trillion in costs to the U.S. Treasury. No high estimate was offered. “We feel a conservative measure of costs is plenty large to attract attention,” said report contributor Ryan Edwards, an economist who studied the war impact on deficit spending. Those numbers leave out hundreds of billions in social costs not born by the U.S. taxpayer but by veterans and their families: another $295 billion to $400 billion, increasing the range of costs to date to some $3.2 trillion to $4 trillion.

THE HUMAN TOLL If the financial costs are elusive, so too is the human toll. The report estimates between 224,475 and 257,655 have been killed in Iraq, Afghanistan and Pakistan, though those numbers give a false sense of precision. There are many sources of data on civilian deaths, most with different results.

The civilian death toll in Iraq — 125,000 — and the number of Saddam’s security forces killed in invasion — 10,000 — are loose estimates. The U.S. military does not publish a thorough accounting. “We don’t do body counts,” Tommy Franks, the U.S. commander in Iraq, famously said after the fall of Saddam in 2003. In Afghanistan, the civilian death count ranges from 11,700 to 13,900. For Pakistan, where there is little access to the battlefield and the United States fights mostly through aerial drone attacks, the study found it impossible to distinguish between civilian and insurgent deaths.

The numbers only consider direct deaths — people killed by bombs or bullets. Estimates for indirect deaths in war vary so much that researchers considered them too arbitrary to report. “When the fighting stops, the indirect dying continues. It’s in fact worse than land mines. The healthcare system is still in bad shape. People are still suffering the effects of malnutrition and so on,” Crawford said. Even where the United States does do body counts — for the members of the military — the numbers may come up short of reality, said Lutz, the study’s co-director. When veterans return home, they are more likely to die in suicides and automobile accidents. “The rate of chaotic behavior,” she said, “is high.” (Additional reporting by Susan Cornwell, Missy Ryan, Brett Gering, Laura MacInnis and Sharon Reich; Editing by Doina Chiacu)