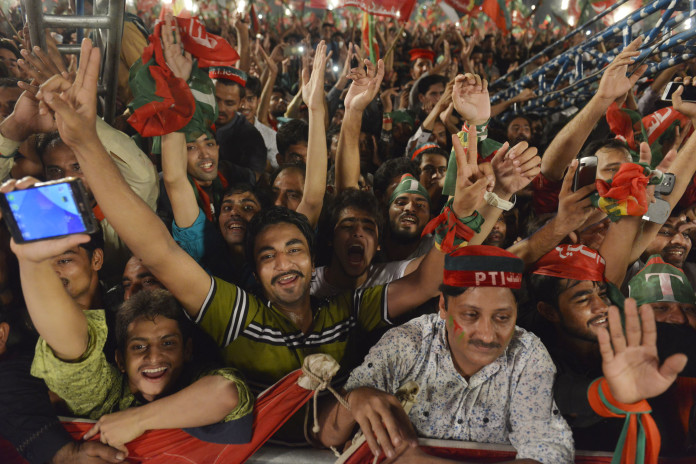 What is Polarization? I suspect most of you or perhaps most in Pakistan don’t fully understand what it means. Polarization is when a society or polity splits in extreme ends, without a connecting middle ground. Pakistan today has become a very polarized polity between those who stand for change as epitomized by PTI and Imran Khan and those who are resisting the change as symbolized by PM Nawaz Sharif, PPP, Malana Fazal ur Rehman and allies. This is a dangerous situation for there is no middle ground left to mediate between these warring factions.

For supporters of Imran Khan all evil lies with Nawaz and allies and all propaganda machinery being controlled or financed by PMLN and allies continues to describe Imran Khan as a dangerous anarchist. PMLN controls govt and is backed by the power of the state and Washington, whereas PTI is without doubt riding on a wave of extraordinary popularity never since the days of ZA Bhutto.

Finding Solutions is always the responsibility of powerful side. In this case this means the govt controlled by PMLN has to find a political solution; unfortunately Nawaz govt does not exhibit any capability of finding a broad based solution. Nawaz Govt from day one is banking on the premise that since it controls lever of state power backed by Washington, sooner or later its opposition will exhaust itself and PMLN will be in a situation to either ignore them or negotiate a cheap deal without the need for any meaningful concessions. This is frightening and may prove disastrous for all sides. For much happens in life without any planning; this is called “Law of Unintended Consequences”.

Earlier PM Nawaz Sharif took unwise decisions that lead to this polarization. Though Elections 2013 suffered from massive rigging, which was obvious from day one, but PTI which was the main target of this rigging in Punjab (given only 8 seats out of 148 directly contested) decided not to agitate but to broadly accept the results and to follow complaints through Election Tribunals which were never suited to address the kind of irregularities that were committed. An over-confident PM Nawaz picked up an unnecessary battle with the military over Musharraf trial, which now almost everyone in PMLN realizes to be a great blunder. (privately all PMLN leaders agree that this was a disaster). Musharraf trial was an absolute power grab and it became obvious to all that if PM Nawaz handcuffs ex-military chief then his power and fear will intimidate Generals, Opposition, Judiciary, media and corporate world.. and no one will be able or willing to challenge him…it was then that military stepped into the arena to confront Nawaz in a calculated manner but Nawaz Sharif’s inability to grasp the limitations of his power soon kept on increasing the crisis between his govt and the intelligence community..that finally took an ugly turn with the confrontation between Geo and the military in which Nawaz govt decided to encourage and back GEO against military making it impossible for GEO to extricate itself from an unnecessary situation…this confrontation then sucked in country’s politics and rest is history..

Why remember all this? because none of that was imagined by either side; all that happened was “Law of Unintended Consequences” – in which one thing lead to the other. Now as it is abundantly clear from Gen. Raheel Sharif’s extended visit to the US that military has been able to establish their direct rapport with Washington and civil govt has lost much steam, but instead of understanding all this loss of power and relevance, simple minds in govt are still considering themselves very smart for not falling to Imran’s dharnas. This childish thinking still continues; they are trying for total victory in situations that demand political compromises. If Nawaz govt continued to try for total victory over Imran and did not find political compromise then Law of Unintended Consequences may lead to greater shocks soon…if Nawaz Sharif and his kitchen cabinet ponders carefully they will realize that compromising with Imran Khan by making meaningful concessions is their best deal; without bringing Imran Khan and PTI as an empowered leader of the Opposition system cannot run and deliver; this is the minimum they ought to do to save the system and to make it legitimate; time is passing and the “Law of Unintended Consequences” is ticking like a time bomb…