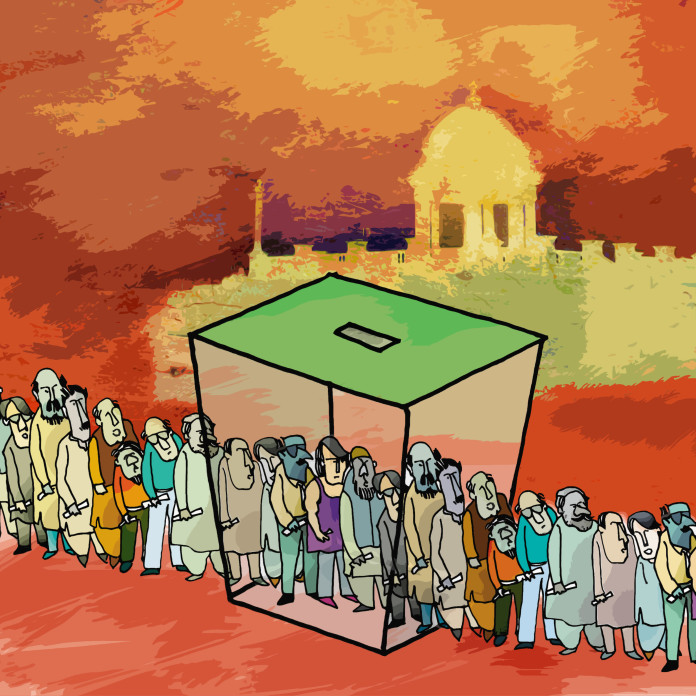 Though the honourable Supreme Court, Election Commission of Pakistan (ECP), NADRA and Attorney General of Pakistan are still battling at the tail end of a debate about the right of overseas Pakistanis to vote and the latest twist is talk of a Presidential ordinance that will do the trick (at the time of going to press); fact is that in all probability, the overseas Pakistanis will not be able to vote in the forthcoming elections. One wonders why?

This “why” becomes relevant and interesting as one investigates a bit. To begin with, manifestos of almost all political parties grant the overseas Pakistanis this right; most leaders from Bilawal Bhutto to Nawaz Sharif have made promises of this throughout 2012, if not earlier — especially during their speeches abroad.

The Supreme Court, perhaps now the most powerful institution in the land, is blowing hot and cold over the issue but this noble rage now emanating from the bench also galvanized a bit too late in the day, somewhere in the middle of February 2013 and that, too, when the court found itself panting and defensive after its rather awkward comments about dual nationals during its furious exercise to politically guillotine Dr Tahir-ul-Qadri.

The overseas vote would have been a positive contribution for various reasons. Even if the expats are not educated they are more exposed to the workings of the world at large; they travel frequently, do financial and commercial transactions more often and mostly live in affluent societies with greater adjustment to the rule of law. Those who live in Europe and North America have experienced mature democracies and most importantly, by virtue of their physical dislocation they end up seeing the homeland as a holistic whole rather than a patchwork of ethnicities, districts and biradaris.

American scholar, Benedict Anderson’s concept of “imagined communities” may help to understand the psychological dynamics of Pakistani expats and diasporas who end up melting into national psyche different from the geographic divisions of those who live and vote inside Pakistan.

Perhaps, because of the peculiar, unpredictable and uncontrollable nature of this vote many inside the Pakistani patchwork of power and politics were afraid of this voting bloc of more than four million. Anyone who has recently read the arguments of Election Commission (ECP) that “not enough time” is left before the elections to facilitate the overseas vote may end up sympathizing with this argument as simple logic and commonsense.

However, the record shows that ECP, NADRA and allied bureaucracies conspired from the beginning against the very concept of the overseas vote. ECP, for instance, in June 2010 in a meeting of the “Special Committee on the Right of Vote for Overseas Pakistanis” rejected the draft legislation for overseas vote.

In the years since then, whenever the subject evenly faintly cropped up for one or the other reason, ECP babus —  with expressions as grim and tragic as those of doctors announcing stillbirth to an expectant mother — extended an amazing range of arguments against the overseas vote.

They told media that overseas vote will be impractical, expensive and a logistical nightmare; it will bring down the credibility of overall elections because authenticity of the voters cannot be verified; it will need amendments to the constitution of Pakistan, to the Representation of Public Act 1976, Delimitation of Constituencies Act 1974, Electoral Polls Act 1974 and to host of other laws and that it will need an enabling legislation — an argument that ECP continued to advance before the Supreme Court till March of 2013 without making any progress on such an enabling legislation.

Was that sheer incompetence, failure of imagination or a well thought out political conspiracy? It may be difficult to conclude but the arguments advanced by ECP were often hilarious and exhibited a mindset and level of consciousness more suited to the middle of 20th century rather than the 21st century of Internet banking, phone transactions, ipads and Blackberries.

ECP, for instance, kept on arguing that identities of voters cannot be verified on Internet or online ignoring that financial transactions worth billions take place daily through electronic identifications and handshakes without either party seeing the other in the old fashioned physical sense.

Given ECP’s fears and insecurities it would have been meaningless to offer examples of the U.S., U.K., Italy, Russia, Australia and Indonesia that offered overseas voting rights, for, ECP could reject them as rich and developed countries.

But unfortunately, the ECP remained unimpressed even by examples of Egypt and Iraq. Finally, in February and March, Pakistan Tehrik-e-Insaf of Imran Khan, conducted an online voting exercise in which more than five million people participated — showing to the whole world “where there is a will, there is a way.”

Again, at April-end, Pakistan’s Foreign Office confirmed that countries like Saudi Arabia, Bahrain, UAE, U.S., U.K. and Australia have granted the permission for overseas Pakistanis to vote. ECP had consistently, argued for the past several years that most countries, especially in Middle East will not allow such voting due to fear of political violence and law and order situations. Now when we know, thanks to the Foreign Office, that these countries have agreed, one wonders why we did not press hard in the past few years?

Was there politics behind ECP’s long list of excuses? One may never be able to conclude with certainty. But the fact that only PTI and MQM took up the issue with any degree of seriousness may point to something.

MQM first talked of a private member’s bill to facilitate overseas voting in October 2012, though it tabled it much late in February 2013. PTI petitioned the Supreme Court in December 2012 and it was this petition that finally lead to the judicial furore in February this year.

PTI remains the only party that was still raising a shout on the issue in mid-April. What about other main parties? Given the fact that coalition from 2008 onwards was led by PPP and PML-N was the opposition with teeth and muscle, it may not be difficult to argue that for some reasons both these parties were not eager for millions of overseas Pakistanis to vote in 2013.