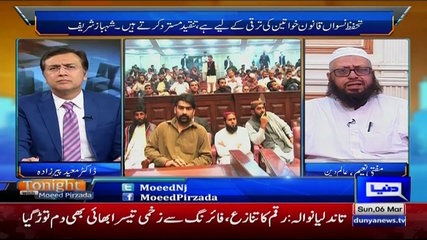 Dr Moeed Pirzada critically discussed the reservations of the Chancellor of Jamia Binoria International, Mufti Naeem. He said this is not right in an Islamic country and many clauses in the Bill are contrary to Quran and Sunnah. While Dr Moeed Pirzada also mentioned mainstream religious parties meeting in Mansoora, Lahore, on March 15 to discuss the next course of action against the conspiracies being hatched by the government. These religious parties belonging to all schools of thought on Saturday rejected the women protection bill recently passed by the Punjab assembly. The announcement was made at the official residence of Maulana Fazlur Rehman in the Ministers Colony here. The meeting was attended by Jamaat-i-Islami emir Sirajul Haq, Awais Noorani, son of late Shah Ahmed Noorani and the leader of Jamiat Ulema Pakistan (JUP-N), Dr Sahibzada Abul Khair Mohammad Zubair (JUP-N), Allama Arif Wahidi of Islami Tehreek of Allama Sajid Naqvi and Allama Abdul Aziz Hanif of Markazi Jamiat Ahle Hadis led by Senator Prof Sajid Mir.