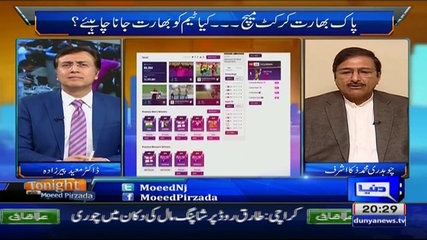 Dr Moeed Pirzada with Zaka Asharaf who is a Former Chairman of Pakistan Cricket Board discussed India’s conspiracy against Pakistan’s International Cricket where Indian Government allowed Extremist groups to directly threaten Pakistan Cricket Team before its visit to India for T20 World Cup. They also appreciated Interior Minister Chaudhry Nisar Ali Khan steps when he said that the Pakistan cricket team will not visit India to participate in the World T20 until the Indian government guaranteed security and made it public. He said as these threats are Pakistan-specific and have to be taken seriously by the Pakistan government. Interior minister Chaudhry Nisar Ali Khan’s remarks came ahead of the team’s expected departure for India on Friday.