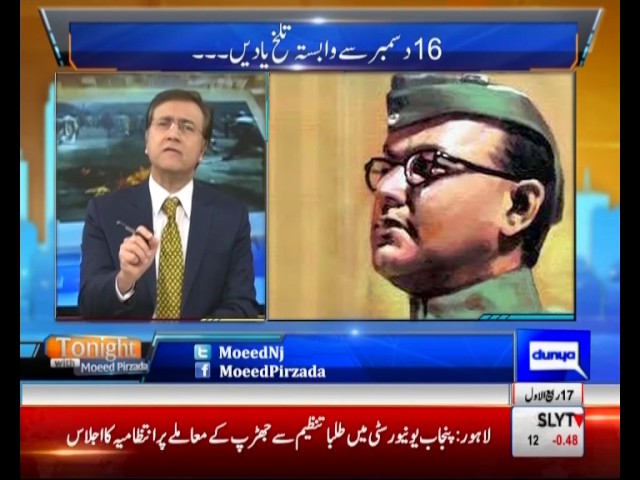 Author of the newly launched book, “Creation of Bangladesh: Myths Exploded”, Dr Junaid Ahmad joined Dr. Moeed Pirzada and explained the importance of writing such a book after 45 years of the fall of Dhaka. Dr Junaid said that since 45 years many foreign authors had been writing on the fall of Dhaka and on various Myths, which were not covered by Pakistani writers that what actually happened.
Deprivation of Bengalis started since their demand for making Bengali as national language was not addressed till 1956, many people died during this movement. Till 1971 there was not a single East Pakistani Chief Secretary there, Investments on Jute mills was by West Pakistani investors and all top managerial posts were for West Pakistanis, while Bengalis were appointed as a labor force.
Dr Junaid also shattered the myth of 93000 troops; that is totally false, it was actually 34000 troops and rest were civilians who were from West Pakistan, and they were either non combat, para-medic, civil servants, their families or personal servants. It was good for them to become prisoners of war, otherwise they could have gotten killed. Genocide by Bengalis was actually started in March when Shiekh Mujib ordered for violent protests and many West Pakistanis got killed in that. Mukti bahni was also supported by 50 thousand Indian Army personals.
Dr Pirzada raised the question that whether Indian understanding is better than us in shaping the narrative? Pakistanis also have understanding but working on the understanding to shape the narrative is a separate thing which lacks in Pakistanis. Everyone sacrifices the national interest before their self interests, said Dr Juanid