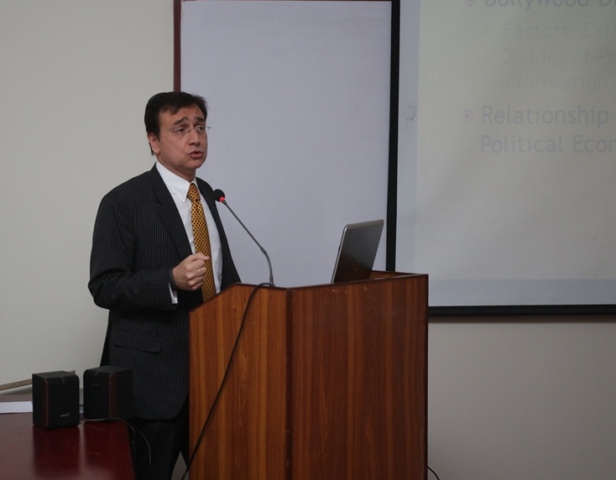 The Forman Journalism Society of the Mass Communication Department arranged a lecture by Dr Moeed Pirzada, a renowned journalist, political analyst, blogger and lead anchor at Dunya TV on 30 April 2015.

Faculty members, both from FC and other institutions, along with a great number of students attended the session in the Center for Public Policy and Governance. Dean of Humanities at FCC, Dr Waseem Anwar, and Chairperson of the Mass Communications Department Mr Muhammad Ali welcomed the guest to the session. Ms Faiza Rafique, advisor FJS, acted as a moderator.

Dr Pirzada started off by giving a brief introduction of himself, referring to his academic and early professional background that helped him discharge the role of a media person efficiently. He said his work as a general surgeon, a civil servant and with the UN, all helped him achieve the ability of analysis, scrutinizing complex and multifaceted political problems and their implications in Pakistan.

To explain the working of the Pakistani media (mainly TVs), he invoked Marshall McLuhan’s ‘medium is the message’; along with other concepts such as “architecture is the code.” He said that the law/power lies in the structure (of the media) that eventually shapes up its content. He emphasized that TV by its very nature is a superficial medium. He said that every medium has its limitations. He also showed a clip of Barrister Aitzaz Ahsan at the Islamabad Literary Festival underlining the importance of books and book reading culture (books being a different medium, with a different message).

Dr Moeed said reading a novel is different from watching a drama or film which is an adaptation of it. However, he said that just as readers of the same book throughout the world share a common feeling, members of a nation can unite on TV by shared feelings of grief, tyranny, tragedy, failure, victory and aspirations, etc.

He said the media persons (on TV) draw strength from presenting themselves as saviors – Robin Hood-like characters who are out to help the poor and the downtrodden against the mighty and the aggressor. He said the same heroics can be traced in films. He also showed clips from films where a hero, a courageous character, stands up against all odds to alleviate the suffering of the helpless. He said the same applied to a degree to TV anchors, as they too present themselves as saviors despite the fact that the media’s model is predicated largely on ratings and profits more than public interest. He said it is a bitter reality that many useful subjects remain off-limits because the idea doesn’t fit well with the scheme of ratings and business.

He said the corporate sector owns most of the Pakistani media. He said the media itself is an expensive business to run, with a trivial margin of profit, and severe competition for ad revenue. However, he said the clout that it brings cannot be discounted.

Concluding his presentation, he emphasized formation of better legal frameworks for effective regulation of the media industry. He also called for studying and adapting media models which are effectively delivering in other countries.