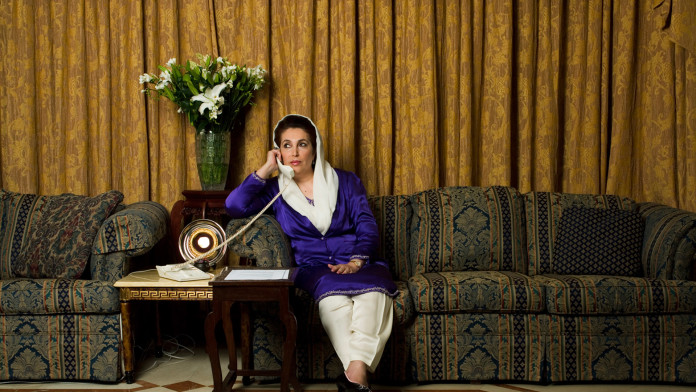 BENAZIR Bhutto was a gifted progeny of a remarkable mind. Confronted by a three-decade long adversity and tragedy, she displayed an uncanny ability to redefine and remerge. There is no doubt that she stood head and shoulder above all her political contemporaries.

And she was not merely brave; she was a woman of extraordinary courage that pressed ahead despite the ‘clear & present danger’ to her life. But let there be no doubt that this gifted Pakistani leader died, not for the Pakistani people but, fighting her way to power through the maze of contradictions that is: American foreign policy.

Few events inspire such copious comment, as her death did. Many were taken by the sheer tragedy and most took issues with the official explanations that Al Qaeda was behind her assassination. Fingers have been pointed at the elements inside the Pakistani security establishment and some like Robert Fisk, the veteran British journalist, have fired the shot at Musharraf himself. What remained missing is a sobre analysis of the conflict of interest that took her life.

Perhaps Michael Portillo, the former Tory politician, was an exception. He struck at the bull’s eye with his aptly titled article in Sunday Times: “That assassin’s strike killed the West’s foreign policy too.” Portillo, a former Tory politician and an old admirer of Bhutto from the days of Oxford was on spot with his candid admission that Americans have no candidate left in the Pakistani elections. Yet that may have been the problem.

An autopsy could have revealed what specifically lead to the 5-cm oval hole in her ‘Temporoparietal region’ and a political post-mortem may be needed to understand the wedge between the US foreign policy interests and those ‘interests’ that ultimately pulled the trigger. Unless the two are reconciled, or this widening crevice somehow narrowed, more on the so-called list of shadowy Al Qaeda may fall to the great peril of the state of Pakistan; this may also seriously escalate the later costs of ‘salvaging’ for the US policy making.

But the wedge is part of the complex relationship Pakistani establishment found itself in after 9/11. Changed global circumstances compelled them to accept, against their better judgment, a purely US construct of ‘war against terrorism’. Many, if not all, in the Pakistani security establishment, suspected the US of furthering long term objectives in Central and South Asia, in other words all around Pakistan under the panoply of the war against terrorism. The power sharing arrangements of the post-Taleban Afghanistan only confirmed these fears.

Combination of needs and insecurities lead both sides to a dangerous tango. If US foreign policy had to advance their interests, Pakistani establishment had to preserve theirs. The mushrooming of non-state actors, jihadists being the principal examples, inside Pakistan became the inevitable costs of this complex, asymmetrical and thus unstable relationship. This soon turned into a relationship without which one side could not achieve its objectives; but without which unfortunately the other could not even survive.

Before her death Bhutto was working with Mark Seigel, her lobbyist, on a new book, Reconciliation: Islam, Democracy and the West. But their relationship dated to early 80s when she was struggling, after her father’s hanging, against Gen Zia’s regime, and was active inside the US. From those days, she had grasped one clear lesson: political power in Pakistan is neither possible nor sustainable without the American blessing.

As a politician desperate to get back to power, Bhutto could spot the ever widening fault lines between the Americans and the Pakistani establishment. And she successfully managed to parachute herself in the flanks: between the Musharraf regime and the Bush administration.

Many publishers in the world may be thinking of hiring Javed Iqbal Cheema to continue Harry Potter sequels; but when this colourful spokesman for Pakistan’s Ministry of Information was charging Al Qaeda for Bhutto’s murder, he was not saying anything new. The received wisdom right from the moment or even before she landed in Pakistan was that she will be under attack from extremists and Al Qaeda. Her bravado statements which she routinely issued to burnish her credentials in Washington and to put Pakistani establishment on defensive, combined with the unconfirmed pronouncements from Baitullah Mehsud were cited to establish the universally accepted belief that Al Qaeda will eliminate her.

But was she a threat to the extremists? Musharraf government is already busy in a war, employing gun-ship helicopters and F-16s against the jihadists; whatever she could do more was to come through the same state apparatus. Isn’t it true that to argue that she represented any greater threat to the jihadists is to say that the war against terrorism under the Musharraf regime is not real?

Bhutto’s ability to do anything significant against terrorists or extremists was seriously at question, as even her old admirer, Portillo admits. However, as she tried building political pressure she successfully scared many other “interests” inside Pakistan to whom she represented an American plan to develop a further pliant government in Islamabad that might affect the overall policies in the region vis-à-vis Afghanistan, nuclear issue and even India; her calculating statements – mostly rhetorical – led to panic in these quarters.

The US is present in the region for the long haul. And new strategies may evolve soon but as it stands now the very “interests” the US may need to rely upon in Pakistan are not prepared to let the US develop multiple actors to deal with; the elimination of Bhutto whether at the hands of Al Qaeda or Al Pacino makes this one thing clear: the US is thwarted for the time being. I am sure this is clear to many of us in Pakistan and to the likes of Anne Patterson and Condoleezza Rice; may be President Bush will take a while to understand this but the message is loud and clear.

And while they decide, we may need to store water, milk and petrol…