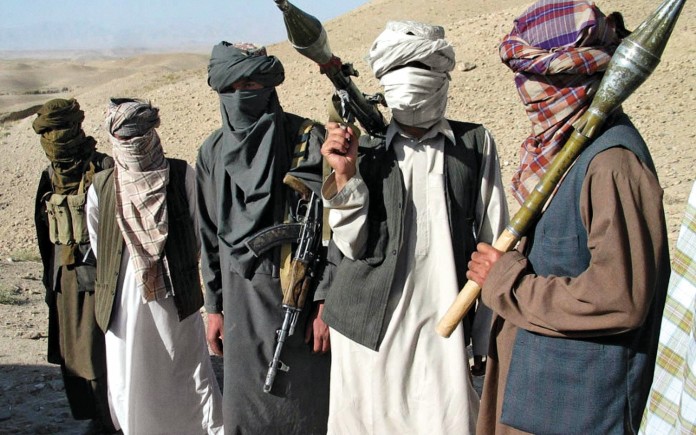 The latest terrorist attack in Qissa Khwani Bazaar, Peshawar, on Sunday, third within the bloody week, since the attack on All Saints Church may now make Imran Khan and PTI look like political buffoons; but the way ANP – in its bid to politically capitalise on the tragedies – and some media commentators are gloating over PTI’s apparent disconnect from the seriousness of situation creates the impression as if these geniuses had some solution at hand which is not being implemented only for the intransigence of Imran Khan and PTI.

No denying that Imran Khan and PTI will have to grasp the fast-changing situation in their own selfish interest; they need reflection to come up with more convincing and persuasive arguments, than hitherto displayed, that can provide them a connect with their support base and wider public, otherwise PTI’s popularity can melt away the way frozen butter does in the sun. But the fate of Imran Khan and PTI are far less important than the fate of Pakistani nation, state and society, and this is what should concentrate our minds.

Negotiating with the TTP for peace, controversial to begin with, has now started to look far less promising to even those like PM Nawaz who had initially signaled his support in APC – and who really matters more than anyone else. However, it is important to understand that the nature of endless debate centered on “negotiations and pace”, “drone strikes”, “our war or American war” that has raged in Pakistan not for the past several months but years and its counter-debate with its own buzz words “this is our war”, “good Taliban bad Taliban”, etc has dangerously sidelined a far more important issue. And that is: irrespective of any negotiations for which we can continue to argue and disagree; state cannot abandon the responsibility to defend its cities, people and its vital strategic interests, but this is precisely what we have done in Pakistan.

Unfortunately both sides of the debate in Pakistan have been arguing from a maximalist position. Those who have been arguing for negotiations with TTP; pulling out of the US war, end of drone strikes and withdrawal of Pakistan army from the tribal areas – Imran Khan, Maulana Fazalur Rehman, Munawar Hassan for instance but many others in rank and file of PMLN – have created this impression as if once these conditions are met, most conflict or terrorism will end. This argument, irrespective of its merits, has an unintended consequence; and that is that we don’t need to develop modern sophisticated counter-terrorism ability for what we need is essentially a broad political settlement with our own estranged people.

On the other hand, a tiny but influential bunch of liberal theorists – mostly united in their love for whisky, hatred against Imran Khan, and other Islamist parties and genuinely afraid of the broader consequence of the growing ultra-religious conservatism – have tried to use this “war against terrorism” to advocate a broader agenda of fighting Islamism, and the societal tendencies that flow from it. Their buzz word is often “clarity” but they end up creating the impression that unless we decide to change the character of Pakistani state, its curricula, delete Objective Resolution from the Constitution, take forceful steps to neutralise the Kashmir-related militants and redefine our interests in Afghanistan, nothing can be achieved. Most issues this group agitates are vitally important considerations, have long-term implications but may not be readily achievable or even desirable to help in our immediate struggle against terrorism. The bottom line is that both sides of the Pakistani debate see an all or none kind of situation.

Both these absolutist or maximalist points of view need to move towards convergence. Together these ferociously opposing points of view – “our war” and “American war” – have not allowed us to focus seriously and sufficiently on increasing our capacity to protect ourselves. We have to realise that there can be no sudden or dramatic breakthrough in achieving peace; what we face today is “anarchism” and we will have to increase our ability to prevent ourselves and to fight it back. Without our ability to protect and hit back, militant groups or their “masters” will have little incentive to sue for peace. This is not a philosophical issue; most of that ability has to be technical, structural and legal. We need to gain greater control over the movement of men and material across our bridges, highways, and entry and exit points. For instance we should immediately introduce a concept of “registered keeper” for all vehicles. Only the registered keeper or his notified persons (family members or drivers dully notified to police) can operate a vehicle.

Police officers should have hand-held devices connected to central data systems from where identity of vehicles and registered keepers or notified persons can be checked within minutes. We need procedures to restrict, regulate and control vehicular entry into places of extreme public congestion like the Kisa Khwani or Liberty market, etc where a bomb explosion can create maximum impact. This is just one example; we need a whole regimen of procedures and capacities and that is simply not possible until we connect and guide all our assets of policing and intelligence from one platform like the National Counter Terrorism Authority. This is what Prime Minister Nawaz should think on after the Sunday attack in Kissa Khwani Bazar. Without this national ability – to protect and hit back – his desires for regional peace, investments, highways from Gawadar to Kashgar and his energy and water plans will remain pipe dreams.