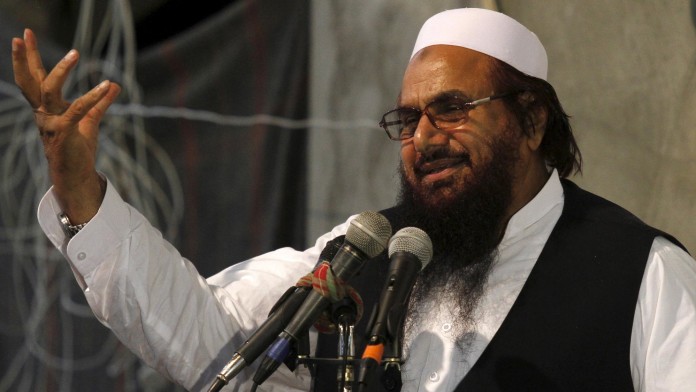 US is not stupid, it is history’s only super power that is actually an hyper power and has great institutional strength to analyse and plan ahead. They are trying to achieve atleast three things: One, they are putting pressure upon all those inside Pakistani establishment that were encouraging Difa-e-Pakistan Council to agitate on roads while government and top military brass is planning to open the NATO Route. Irrespective of Hafiz Saeed’s initial bravado, pressure from Washington will increase in the next few weeks and Pakistani govt will have to do something to curb his profile.

Second, depending upon their interests Washington may not do anything for months or can declare, in the next few weeks that in response to ‘award’ they have now received fresh evidence that links Hafiz Saeed to Mumbai or AlQaeda and increasing pressure upon Pakistan to hand him over to them or try him inside Pakistan in view of the fresh evidence available. Third, they had realized that ‘honey moon’ between Pakistan and India is giving Islamabad greater confidence to resist pressures from Washington and they have suddenly come up with this to refresh ‘Indian wounds’ and to reduce good will that Pakistan had strarted enjoying inside Indian decision making circles.

What will happen? probably nothing immediately, because Pakistan will be finalizing its “NATO Deal” with the US as soon as practical and US will find it counter-productive to increase any more pressure unless absolutely essential. However they will let the Hafiz Saeed sword hanging on Pakistan for use later.

Why Pakistan is not able to prosecute Hafiz Saeed since Nov 2008? for two reasons: One, evidence probably links elements inisde Lashkar that constituted a ‘cut-away group’ that was being controlled by some one other than Hafiz or his immediate command and that evidence too is mostly of intelligence nature. Almost all cases inside Pakisan investigated by ISI have failed in courts for the same reason (Marriot bombing, GHQ Attack etc..)..Two, Pakistani officials realize that Laskhar/JeD is the most organized of the militant groups that is armed and is intact and is not against the Pakistani state.

They fear that any strong administrative action against this group will lead to radical splinter groups that will soon started attacking Pakistani state and society the way other groups have done. Pakistani officials think that the repeated news items carried by western media of links between Jed/Lashkar and AlQaeda are ‘deliberate disinformations’ created by western intelligence agencies to pressurize them to act in west’s interest and to cause greater havoc in Pakistan.

Will Laskhar be able to do terrorim inside India or serious militancy in Indian adminstered kashmir? Almost impossible. Things have moved much beyond that. Laskhar/Jed will try to find a radical political role inside Pakistan, they know they are under international watch and things have changed; their old role will never come back. Will this comfort Indian opinion? off-course common man will and perhaps should not buy this but Indian decision makers undersand that.

They use Lashkar/Jed reference for larger political reasons and for reducing Pakistan’s potential (even if it is remote) of adverse action inside Kashmir but they too are not much worried about Lashkar/Jed at the moment. However they have to live upto the public expectations. Hafiz Saeed is history with or without this bounty. US is looking for its own interests; it’s not worried about India. India policy makers are more mature and clever than what US estimates them. They will, in all probability, not fall for the US tactic.