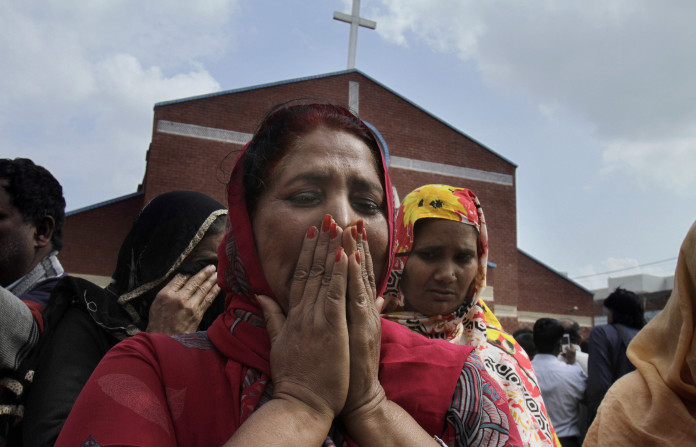 The senseless massacre of innocent Christian worshippers – men, women and children – at the gates of ‘All Saints Church’ in Peshawar is unprecedented not only in Pakistan’s troubled Odyssey with TTP and other medieval reincarnations but also inks with blood and flesh a totally new chapter of Muslim Christian interaction in South Asia. Yet usual knee jerk apologies or explanations laced with jargon like: “terrorists have no religion”, or “fiery speeches by mullah “X” or anchor “Y” from pulpit or TV screen” etc will be misleading. Some papers and news agencies were quick to remind readers of “Gojra” or “Rimsha Masih” and “growing discrimination” against Christians. All such ills do exist and are a matter of shame for us but parading them as reasons for these acts of terrorism only help those who perpetrate these “crimes against humanity” and end up dividing and polarizing society and a political order that has to find a workable, sustainable counter strategy.

Many, me included, were always skeptical of the arguments advanced, the reasoning given and the understanding of underlying issues that crystallized in the form of political leadership’s APC on 9th September. Skeptics thought that the time for negotiations had not arrived; APC approach sends wrong signals and will have grave implications; brilliant analysis offered by Ejaz Haider (Defining this War, Tribune, 17th Sept) and Brig Imran Malik (A Monumental Folly, Nation, 22 Sept) said it all. We also cynically suspected that perhaps politician’s approach can be described as “Ahtemam-e-Hujat” (preparation to create the excuse).

However the assassination of Gen. Niazi (GOC Swat) and the mass murder at the ‘All Saints Church’ – both highly symbolic in nature apart from tragic – reveals something far more intriguing: it demonstrates, once and for all, that irrespective of all our reservations against APC – naivety displayed by politicians like Imran Khan, confusion by rank and file of PML-N, surrender to populism by Nawaz and rather sheepish behavior by the military establishment – there also existed a “strategic mind set” somewhere out there that was determined to defeat the reconciliatory political mood that lead to APC and was reinforced by it. And that too in a rush; But why?; answer to this strange question may be important for all of us, for the skeptics of APC wanted a well defined, orchestrated “counter-insurgency plan” a strategy to defeat these “medieval militants” and to end the reign of mayhem and chaos. But could the “strategic mind set” that is literally forcing us to pick up the gun and fight is also looking for the same end?

The events of the past two weeks since APC, were proof again, if one was needed, that TTP and other militant groups loosely aligned with it or just using its brand name as an “umbrella franchise” have no coherent, defined existence, shared ideology, political goals or consensus; the only thing that unites them from time to time is a common agenda to spread divisive hatred, instability and chaos. And if anything their antics, their behavior – for instance TTP’s inability to distance itself from the murder of GOC SWAT – gives credence to the argument that they are not even sovereign in their acts, and some or many of these may well be proxies of other forces around – Whether they take responsibility for an event or not is immaterial; for innumerable entities exist and new keep on emerging with fantastic names and with dizzying speed to take credit for the latest act of barbarity.

Much TV and media driven debate and even civil society discourse on TTP misses out these points for it attaches too much importance to the behavior and belief of the suicide bombers. But these bipedals are merely foot soldiers and that too: dehumanized zombies; human tools and products of a war machine that walk and identify their targets like newly-invented robotic creatures with limbs, optic and audio features. Israeli efforts to understand the phenomenon may be of help to us; while Muslims, British and European Left and many human right groups around the world kept on pointing towards the “human conditions” in West Bank and Gaza that lead to the creation of suicide bombers, Israeli analysts were adamant that “reaction theories” have little relevance; foot soldiers are irrelevant and pale into insignificance as compared to the role of “master trainers, financial sponsors and political support.

In case of Pakistan, TTP itself might only be a “multi-headed zombie” providing robotic limbs, eyes and ears to its master “strategic mindset” for inflicting another “thousand cuts”. As we prepare to fight – for no option is left – this aspect – that someone also wants to push us into this inferno at this moment in history – needs to be kept in mind; since we need to battle at multiple levels and that not only includes logistics, political will and finance but also managing diplomatic relations and communication strategies internally and externally. Not to forget reforming and adjusting the legal milieu and giving some “reality inducing injections” to our human right organizations so that they wake up to realize that flight from Brussels is over.

Whereas human right organizations and liberal pundits of fashionable “hate & mullah theories” “abolish death penalty” etc have to close ranks with the rest; one politician that desperately needs good amount of hot coffee is: Imran Khan. Though countless others – known and unknown mortals – can be blamed for naivety but Khan has been the biggest proponent of the “reaction theory”; he was again airing it in Peshawar when he expressed surprise that why something happens whenever peace is given a chance. The answer might come from the world of medical science. If you diagnose ‘meningitis’ as ‘meningeal cancer’ or ‘appendicitis’ as ‘gastroenteritis’ then the results can be disastrous. Nawaz, in London, has ably distanced himself from APC; it’s now time for Imran and his top advisers to huddle together in the pavilion – just like it is important for liberal anti-religious pot smokers to reflect on their mumbo jumbo- and realize that theories of “reaction” by “innocent self-respecting tribals” and “cruel drone strikes” have serious limitations in terms of defining and diagnosing TTP and all what it stands for.