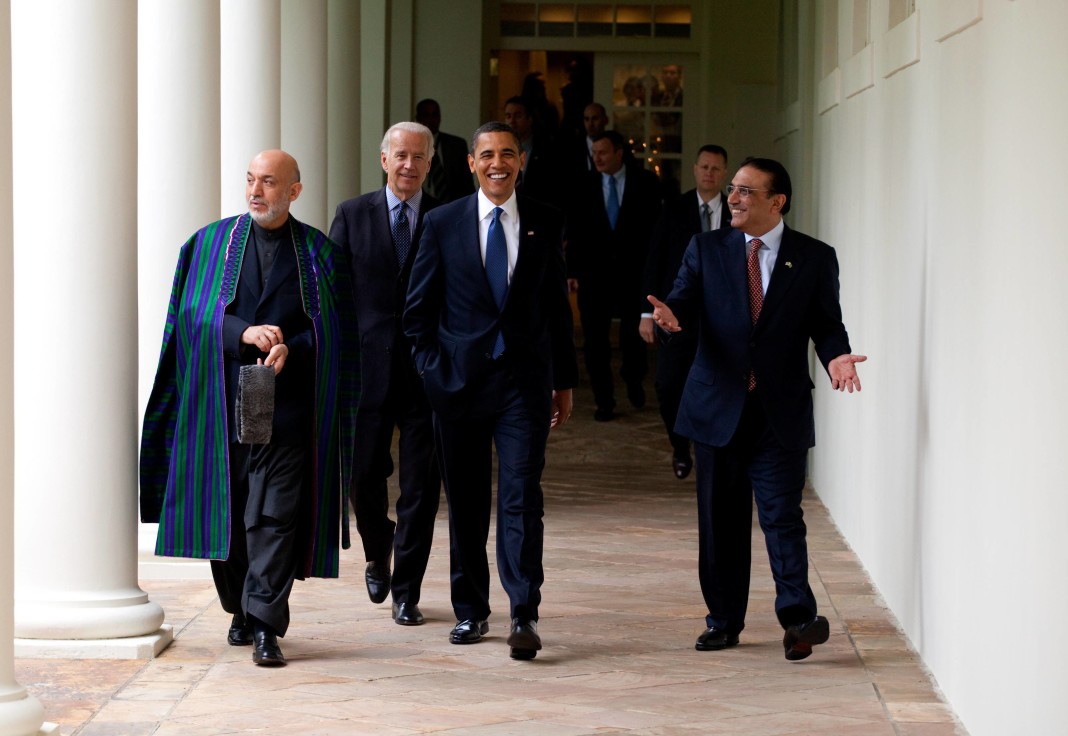 Mantras of foreign policy – laced with juicy terms like Pakistan, Afghanistan and Iran – may have been mentioned in presidential debates but Barack Obama fought and won his re-elections against Mitt Romney on fault lines quintessentially American: how big the big brother should be? How to fix the fiscal deficit? Who should pay how much tax? Has Affordable Care Act been the right pill to reform the ailing health care? Should federal government pour in billions to save Atlanta’s auto industry? And should Congress be pushed to pass the Dream Act? Many of such issues are so intrinsic to the US that outsiders – unless they specialize in American Affairs – fail to get a real sense of them. But the merits or demerits of the American debate is of little concern to the people across the blue planet. They see America’s first Black President through a different lens; a lens of their own and one that keeps changing. Pakistan is no different.

Obama then becomes a global chameleon. Americans have elected him to lead them – and now for the second time – but in a strange way almost every part of the world, irrespective of faith, race and color, has one or the other kind of claim upon him. And I am not talking of Obama senior’s Kenya or Lolo Soetoro’s Indonesia or Gujranwala where his mother Ann Dunham briefly worked, or merely of the British and the Europeans who found in his normalcy an inevitable relief from the Puritanism of George Bush; I am literally talking of the whole world.

After his recent re-election he was on his charm offensive across Southeast Asia to stake a bigger presence for the United States which is also supposed to mean: containment of China. And this was also a fast and furious trip during which his mind was stuck in the battle fields of Middle East where Israelis- who had patiently waited for the US elections to end before they could test the new structures thrown up by Arab Spring – were pounding hapless Palestinians and both the aggressors – insecure behind their Iron Dome missile shields – and the victims –armed with useless rockets- were eagerly waiting for the imperial master, the US, to intervene, to disengage and rescue them from the nihilistic futility of each other. But in Thailand many were being dazzled and seduced by an American president who they discovered had this strange affinity for the native brand of Buddhism and to the local monasteries. And in the good old Burma- the romantic land of Amitav Gosh’s elephants, planet’s last dictators and forever young Aung Sang Sui Kyi – the Myanmar Times welcomed him as “O-Burma”.

Can we then blame Pakistanis to fall in love with this strange unbelievable character: Barack Hussain Obama? Before you ask me to get my head examined, let me quickly clarify; I am not talking of now, this accident I am referring to happened more than fourteen hundred days ago, in the seductive summer of 2008. For Pakistanis Senator Obama, the presidential candidate, meant: a challenger to the status quo, David and Goliath story in reverse; a break in the Anglo-Saxon and Jewish strangle hold on global power. And above all, they had a sneaking suspicion that the aspiring president, however hard he may deny, is actually one of them; a Muslim. That was in the months before the US elections of 2008, when the candidate Obama oozed optimism while talking of finding solutions in the Middle East and at least once referred to the Holbrooke’s dreaded “K word”.

It was in those balmy heady days, when many also read an exuberant article written by Professor Adil Najam who then still taught at Boston University. This piece with its rather suggestive title, “Barack Obama’s Pakistan Connections” went into details of how Senator Obama’s mother, Ann Dunham, had worked and lived in Pakistan as a UNDP consultant, how she travelled between Lahore and Gujranwala and lived for months in Lahore’s Avari Towers; and how young Obama had been visiting her. All this was perhaps sufficient for Pakistanis as evidence of their good fortunes; of their moment in history with a new messiah, a younger Nixon in White House. But there was more: young Obama had travelled across Pakistan; stayed with his college friends in Karachi; his roommate in Manhattan during Columbia days, “Sohale Siddiq” was a Pakistani and his memoirs, “Dreams from My Father” provide glimpses of his friendship with several Pakistanis in college days.

Time passed on. In February 2010, I did a tv program in which I invited respected politician, Senator Mushahid Hussain, and prominent tv Anchor Talat Hussain to analyze what one year of Obama presidency meant for Pakistanis. Talat was not much enthusiastic but Senator Mushahid still had a strange optimism about Obama; I remember him taking satisfaction in the middle word of the American president’s name: “Hussain” I don’t know what Mushahid Hussain thinks now in year 2012, but for the same program we did, what is called: “Vox-Pops” in media’s language. Out of the 25 people we interviewed on the streets of Islamabad, most thought that Obama was a good decent man but is a mere pawn of the powerful system he represents, a poster boy of good intentions who will not be able to change anything and thus means nothing to their lives.

By that time it had become clear that Obama’s Middle East peace plan had failed to take off; the initial excitement he created by his speech at Al-Azhar University in Cairo in June of 2009, in which he talked of the “new beginnings’” had gradually evaporated; what disappointed Pakistanis the most was Obama and his team’s quick and total surrender to the Indian position on Kashmir. Pakistanis could feel but Obama’s team could not realize the irony when Richard Holbrooke repeatedly referred to Kashmir as the “dreaded K word”. This to Pakistanis was always a reminder of the furor which New Delhi created when it was briefly hinted in Washington that there will be an Obama envoy for India, Pakistan and Afghanistan. The David of Pakistani fantasy had proved itself far too small, weak and compromised in front of the Goliaths of the day.

By the time America moved towards the election of 2012, Obama in Pakistani minds had become synonymous with endless drone strikes, CIA assassins, will full violation of Pakistani sovereignty and the tragedy of Salala in which 24 Pakistani servicemen were killed by the US air operations. Pakistanis felt that the creation of the misleading term, “AfPak” lead to an unfortunate paradigm shift from Washington to London to Brussels under which Pakistan was increasingly viewed as an entity whose sole purpose was to serve the US and western ends in Afghanistan; a country of around 200 million people was thus being viewed solely with the lens of the Afghan theater of war.

So when Salala tragedy happened, in the November of 2011, to most Pakistanis it was not an accident that happened in the “fog of war” as the US side described it, but a calculated act of ‘punishment’, a natural culmination of all that was brewing for the past several years. This lead to Pakistan blocking the US and NATO supplies through its territory for several months, and before the US elections both sides had cautiously started to pick up threads of a new relationship – albeit limited in scope than what was once imagined when Hillary Clinton first visited Pakistan as the Secretary of State in October of 2009.

Just before the elections, Pakistani media picked up a BBC survey that Pakistan was the only country in the whole world where a slim majority favored Romney winning against Obama. But many doubted the accuracy of that survey. All gossip on tv, radio, social media and the wisdom emanating from the columns of the print publications indicated that still the overwhelming majority of the Pakistanis favored an Obama victory. Pakistanis have perhaps moved full circle on their relationship and historic fantasy with the US.

Traditionally the received wisdom in Pakistan has been that republicans in White house are somehow good for Pakistan; images of Nixon, Kissinger and Ronald Reagan come to mind. Many commentators still –even before this election – offered similar arguments But the rest of Pakistan has moved on. We have understood that the US, this region and the world have reached a stage where attitudes and policies towards Pakistan will not depend upon the man or the party in White house. This could have been true any way but Obama’s four years and the geometric contrast between what he espoused and inspired and what he turned out to be perhaps constituted the final evidence.

In an ironic way Pakistanis have started to become ‘bipartisan’ on US politics. They realized that they have to work their way with whosoever sits in Oval Office and a known devil is better than an unknown angel. Obama thus represented continuity; he visited India but decided not to visit Pakistan, he appeared on tv screens to defend CIA assassins as ‘diplomats’, willfully violated Pakistani sovereignty, multiplied drone attacks and used them as a weapon of choice and refused apologizing to Pakistan even on something as heinous as Salala. But in an odd and cruel way, he and Pakistan have learnt to co-exist and deal with each other; today after the reopening of US and NATO supplies there is a somber realization of the limitations on both sides of what can be demanded or expected or what is possible.

In the months to come the new president and his team will spend most time grappling with the issues of US economy, fiscal deficit, job creation and will have to reflect on healing a United States that in recent elections has appeared bitterly fractured on issues of race, age and party. On foreign policy, Israel has already thrown its gauntlet to challenge and check the political order that had emerged out of what is called ‘Arab Spring; soon containing Iran and adjusting to power transformation in Beijing will dominate attention spans in Washington. Pakistan will continue to be part of two debates: withdrawal from Afghanistan and continuing instability in a nuclear armed Muslim country.

Pakistan’s biggest enemy today is the narrative on Pakistan. This is an egg and chicken story. Whereas the problems Pakistan faces create the narrative but the narrative itself multiplies the challenges on ground and there may be some evidence that it encourages various rivals to keep investing in creating events on ground to beef up the narrative. While Washington and Islamabad deal with the issues of US withdrawal and power arrangements in Kabul, the only real achievement President Obama and his Pakistani interlocutors should aspire for Pakistan – if they grasp it so – will be to help change the narrative on the country.

David Sanger’s book, “Confront and Conceal” paints an Obama worried for an imploding Pakistan armed with nuclear weapons. This needs to change. Pakistan needs to be defined and understood as a large Muslim country of around 200 million grappling with the immense challenges of globalization and relations with west. It’s struggle to define itself, its seeming chaos and its fervent energy all can be understood If viewed along complex political realities like Indonesia, Turkey, Iran and Egypt; making comparisons with the seeming tranquility of tiny petro-republics created across Middle East to make adjustments for British withdrawal are misleading.

President Obama can thus help Pakistan by letting his new team understand the complex realities of this region; by listening more to the diplomatic missions than dictating from Washington; by letting State department lead rather than being made to dance on the whims of Pentagon and CIA; by refusing to turn the US engagement with India and Pakistan to be a zero sum game and above all he needs to sum up all this into a positive message by planning a visit to Pakistan.