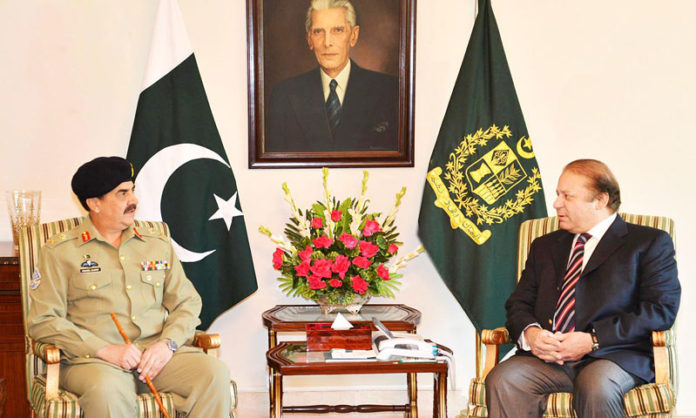 Nawaz Sharif has either outsmarted and defeated the Establishment or both are fighting a ‘Noora Kushti’ for public consumption? This provocative piece is a note written by Waqar Ahmed at my Facebook page; and I have turned that into an article, with his permission, for wider discussion. Nothing has been changed or edited; it is also available on my Facebook page in posts of 24th May.

Keeping in mind above stated facts, there are only two PRACTICAL possibilities

(a) “Establishment” was and has been in partnership with Nawaz throughout this time creating a very intelligently and carefully designed perception of Nawaz being “anti-establishment” and presenting him to be at a war with establishment. It gave establishment the breathing space to launch some very key moves. Zarb e Azab, CPEC, Karachi, Sindh, military courts etc. A “noora kushti” in short between Noon and Establishment thus making all active segments of society i.e., lawyers, liberals, seculars, self styled anti-establishment heroes, nationalists of ANP, Balochistan etc getting under the flag of Noon. So an image of IK to be an “establishment’s guy” was deliberately created and reinforced

(b) Establishment chose the “lesser evil”. A CLEAN and arrogant Khan would be far more difficult to handle than a “Kana” Nawaz. IK’s popularity could not be damaged by personal scandals of the past and he could not compromise on financial affairs. Nawaz on the other hand, has looted so much in the past that it becomes easy for establishment to “tame the lion” and make it dance, the way they want on their finger tips

The third possibility but widely believed:
Nawaz is politically very strong. He has developed a grip over every institution, using media and angling, he has been able to defeat establishment. Thus he is the savior of “civilian supremacy”. He is suffering at the hand of establishment and yet fighting with it. Practically, he has surrendered every authority to establishment. But he is still FIGHTING well good luck with that and he is not a dead horse after Panama episode he will easily get a “clean chit” from a “tooth less” commission even now. And it will not affect his political strength in any way etc.

Ultimate Decision, I leave it up to the readers. Which one is more likely to be true? And why?

[Reproduced from Facebook Page, with permission of Mr. Waqar Ahmed, who offered this for discussion of readers]