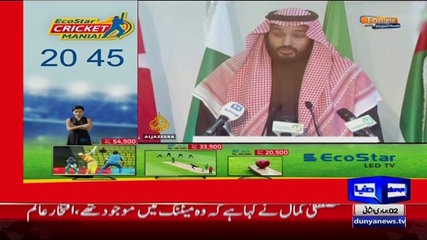 Prime Minister Nawaz Sharif and Chief of Army Staff General Raheel Sharif along with the top Saudi leadership witnessed the concluding ceremony of ‘Thunder of the North’ military exercises in the northern region of Saudi Arabia. Leaders of Egypt, Sudan, Kuwait along with military chiefs of 20 states were also present to see these exercises. Dr Moeed Pirzada along with Defense Analyst General (R) Shoaib Amjad critically discussed the importance of these military exercises and what role Pakistan needs to play in it as Armed forces from around 20 countries including Pakistan and Malaysia are gathering in northern Saudi Arabia Sunday for “the largest, most important military manoeuvres” ever staged in the region. Important questions were also raised regarding Last December, when a new 35-member coalition to fight “terrorism” in Islamic countries was formed. This announcement also comes as the kingdom, a member of the US-led coalition targeting the Islamic State group, said it has deployed war planes to a Turkish air base in order to “intensify” its operations against IS in Syria.