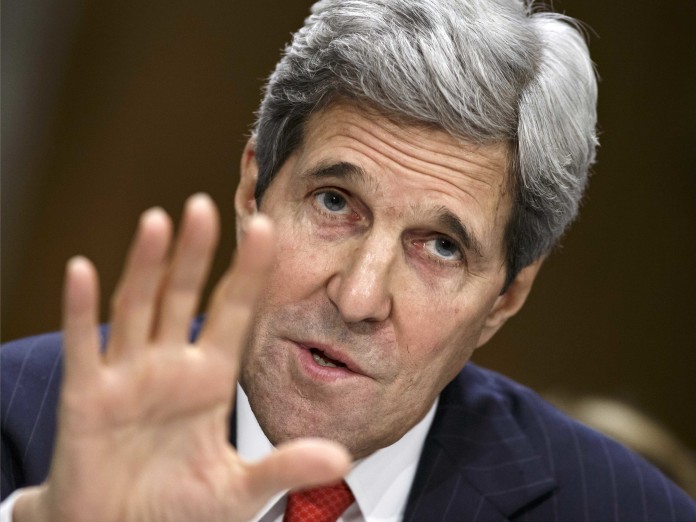 Hi! as you all know Senator John Kerry is in Pakisan. He is a great visionary, a man of advanced consciousness, an able statesman, and a leader who thinks in terms of positive solutions for the world and for this region. I will say he is a friend of Pakistan. Had he won the elections in 2004 instead of George Bush history might have been somewhat different. However we all know that he is comming here at a very difficult moment and through the New York Times story which I posted on this page we know that he is brining certain tough demands and conditions.

But we need not fear for a single moment. Whereas this Osama Bin Laden saga is deeply embarrassing, and we are under pressure from international media and community but lets be clear in our own minds first that we as a country or people had nothing to do with that ass hole or his stupid irrational Al-Qaeda. The American allegations against Pakistani military or ISI of being soft on Afghan Taliban may have substance and make sense given our Pakistani reservations on Afganistan and we do understand these conflicts, but given the whole history of the last 10-15 years we should have no doubt in our minds that “Bin Laden” was of no use to us, he was an enemy whose terror brigades in the form of Al Qaeda and TTP wreaked hell on Pakistan and Pakistanis. Al Qaeda killed 3000 innocent on Americna soil but it also lead to the deaths of almost 40, 000 Pakistanis many of whom were our friends, loved ones and neighbours. If TTP mourned OBL’s death then we know that TTP is the number one enemy of Pakistani defense establishment and Pakistani state that even attacked our sacred places like Data ki Nagri.

Given this moment and the way it has played across the world and the doubts that have been genuninely created (and then purposefully exaggerated by vested interest and lobbies) John Kerry may – and more than him, certain black sheep in our own midst- will try to frighten us of international isolation, of US sanctions, end of KLB or military aid, end of IMF tranches and so on… we must listen respectfully and carefully, this is their moment and we are on defensive so we must respectfully listen but we not be afraid and we must not budge. Why?

I will tell you why? the way this OBL episode has played, it is getting abundantly clear that there was no Pakistani complicity in hiding OBL and deep down in their hearts the American policy makers know it and they know it for sure. They won’t say it, it is in their interest to pose that they might have evidence that may prove ISI complicity and that OBL was still operational. This is all non sense; actions speak louder than words. We know for sure (thanks to Americans changing their story many times) that they only wanted to kill Osama Bin Laden (and this vital question that why they wanted to kill and not capture puts them on defensive) and they never wanted to captutre him alive. Ask yourself why this is important to us? this is vitally important because if they really believed that ass hole, living with 3 wives and 13 children, was operationally active then they would not have killed him, they would have captured him alive for investigation. This story of several flash drives and computer hard drives looks good to unsuspecting eyes and for lay press but has no real merit. What is the significnace of Flash Drives when you don’t care or not interested in capturing the master mind of everything…???…Osama Bin Laden’s death was a big psychological achievement for Obama Administration but they know it and we know it that this was a symbolic and ceremonial victory, a trophy that helps complete the “Closure on 9/11” but that does not change much on ground…in this region…and using that to pressurise Pakistan is smart clever politics but then we also know that this is “clever smart poltics”.

We must tell John Kerry honestly and sincerely that we are going to do a massive investigation through an “Independent National Commission” as approved by the parliament and will punish if some officials are found complicit and we will publish our findings to the whole world. And that we are determined to improve and reform our security and intelligence systems and will plug holes and will increase coordination between ISI, FIA and Police. And that we will be hunting for Al Qaeda and Ayman Al Zawahri more than ever before but we also want to disucss our differences in open. And we are shocked the way US has invaded an ally that has been fighting on its side for the last 10 years! …an ally that adopted America’s war against terrorism as its own war and paid with 40, 000 lives…Bin Laden was important but even then US has shown utter disregard of the political, regional and psychological impact of its actions. And that we do have national interests in the outcome of American end game in Afghanistan and whereas we like America want peace and stabiltiy in Afghanistan we are concerned that America has no clear road map for Afghanistan and shows no or little sesnitivity to our national interests there…and that whereas our goals are same our approaches towards achieving those goals could be different..

We must not show those childish emotional reactions which are then quoted as Anti-Americanism; we must be respectful and polite and patient but we must know that despite all that has happened America, espeically at this stage of the end game in Afghanistan and the comming US Elections needs us as much as we need them. If our economic problems necessitate their help and attention then they also need to disperse aid to manage our poltiical system. Aid gives them influence and control inside Islamabad. This is a a mutual game. This is mental chess. We lost it when we quiet unnecessarrilly accepted Kerry Lugar Bill in 2009 but now we should not let “Pakistani stooges” play their game again. If US wants to extract concessions on Afghanistan which we cannot give and they dangle the threat of “Aid cut off” then let them do it because if we did’nt deal wisely and carefully with the US pressure and demands then it will become even more difficult for us later. In fact we are in deep shit today, and perceived to be on the wrong side of the international community, because in 1980’s we were often irresponsible in our efforts to please the US.

If despite all what we have done or stood for, the US still cuts off our aid, then let them do it. It will only prove those right that always claimed that all US promises of a sustained relationship are fake and the US is unable to have anything more than a transactional relationship with Paksitan, a relationship contingent upon Pakistani miilitary playing their game in the region. Consequences of their irresponsible actions will be as hard for them as for us. Also over the last 10 years the $20 billion which US media repeatedly quotes had about $9 Billion of Coailition Support Funds (CSF) which was a reimbursement of the cost incurred by Pakistani military and that was a contractual obligation between Pentagon and the military, and only $200 million has flowed from the Kerry Lugar Bill…bottom line is that cutting off of aid can be painful but we can survive.

In the end, we all must be clear in our own minds that America is not our enemy, for the past 50 years of our history we have tried always to be on the American side; we have no ideolgoigcal or territorial issues with America. We are not stupid or irrational to be conceiving a conflict with a Super power like the US. Why should we be enemies of the US? or even perceived as such? We have always done more than any other country to help the US in this region but this does not mean that we will ignore our long term interets and fears in Afghanistan or this region or should be so afraid or guilty that we cannot air them or take a logical position about them…this is the time to air our differences, sot that they can be deabted and resolved…

Bottom line is that yes we are embarrased on this OBL episode for our inability to capture him for he was also our public enemy one, but lets act like mature people, this is not the end of the world and does not prove anything, and any attempts to arm twist us by making us over-guilty by this OBL story looks very suspect… lets look toward the stable future of this region in which United States has to play a constructive role with responsibility and not through the narrow needs of an “Election year”…..