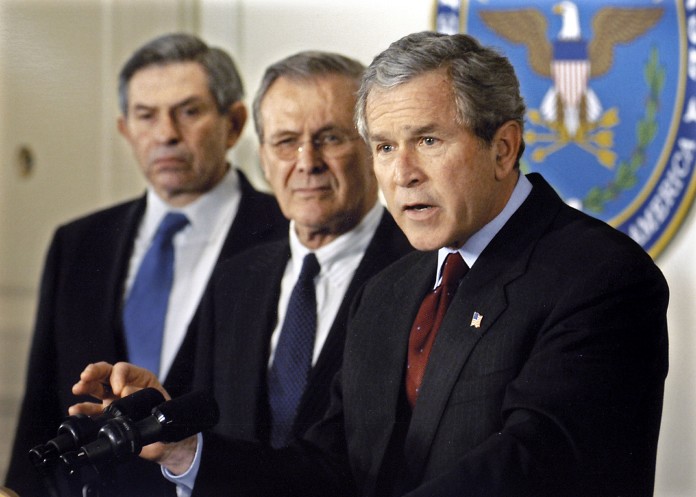 The US Congressional bill designed to implement the ‘9/11 Commission Recommendations Act of 2007’ contains the seeds of new thinking on Pakistan. As widely known, this voluminous piece of legislation makes the continuation of assistance to Pakistan contingent upon its performance against the Taleban.

But oddly enough, it does something more: it allows for future presidential waivers on the basis of the pace of democratic reform; extension of the rule of law; and the conduct of the parliamentary elections.

Not surprisingly, this bill has been received with anxiety in Islamabad; but — outside the government — this has more to do with the timing than a fair assessment on merits. Unfortunately, it emerged at the tail end of a sequence of events: bloody siege of the ‘Lal Masjid’ in Islamabad; a string of reprisal suicide attacks across Pakistan’s northwest; publication of ‘National Intelligence Estimates’ in Washington and threats by US national security officials of possible military strikes inside Pakistani territory.

The grotesqueness of military action against ‘Lal Masjid’ and the violent disruption of the suicide attacks in the northwest that left more than 300 dead were to Pakistanis poignant reminders of the ever growing costs of the war against terror, and of the difficult policy choices. Many observed cynically that the much talked about ‘National Intelligence Estimate’ in the context of Pakistan also mentions, on the very same page, that ‘Al Qaeda in Iraq’ — in a country where it never existed before the luxurious invitation by the US misadventure — is planning to attack the US homeland.

Amidst this mindset, the repeated mantras by the US national security officials that ‘Pakistan needs to do more’, coupled with the threat that they reserve the right of military attacks inside Pakistani territory were received with the scorn they probably deserved. No wonder then that many in the Pakistani civil-military establishment and the vernacular press saw the bill as a coda to the familiar American music of betrayal and abandonment.

But far from that the US Congress seems to be arguing for a tighter embrace; the bill in its draft form was making its legislative journey through the House and the Senate since January 2007, and section 1442 dealing with Pakistan grew out of the realisation — a product of the thinking of past several years — that despite the risks involved the US has no option but to push towards ensuring a democratic Pakistan as the best guarantor of regional security and US interests in South Asia.

One may wonder where this understanding originates from. The answer is: the renewed Pak-US relationship since 9/11 had a broader bandwidth; often beyond the traditional channels of communication. It saw an intense exchange of ideas between the State Department, various US agencies and think tanks on one side and Pakistani NGOs, print and electronic media and civil society opinion makers on the other.

The increasingly sophisticated understanding of the nexus between the state agencies and Jihadi culture, the role of madrassas, the spread of extremism under the military rule and ironically the collapse of all institutions sans Pakistan army is a result of this continuous and intense exchange.

It is precisely a result of this fine tuned understanding that the US Congress now identifies, in its “findings”, the issues like: increasing poverty and corruption, lack of effective government institutions, dwindling rule of law as the “critical issues” that have the potential of disrupting the relationship between the US and Pakistan. And it wants the US president to put up a strategy, within 90 days of the new Act, to deal with these issues on a level parallel with the risks like ‘nuclear proliferation’ and ‘Islamic terrorism’.

Even the dramatic re-emergence of Benazir Bhutto on Pakistan’s political scene, and behind the doors US diplomacy to push for a rapprochement between her and General Musharraf was a byproduct of this newer understanding.

Washington understands the risks — of radicalisation and instability — inherent in continued military rule, but also calculates that in a state of advanced institutional collapse politicians will not be able to deliver on anything unless military backs them up. This then is the basis for Pakistan’s much talked about “deal” between Bhutto and Musharraf.

In Pakistan we have always under-estimated the importance of the feedback provided by the chattering classes; but the newer US legislation and Washington’s behind the scenes diplomacy of continuous engagement, of sustained persuasions, to nudge apparently irreconcilable political interests towards meaningful dialogue only proves that the Americans were listening all along — and this time perhaps for the better.

However, it is perhaps time for Pakistanis to tell the Americans that if they are really serious about making progress then they need to understand and do more. Flashes of a new thinking here and there may inspire but are hardly a replacement for a coherent vision. Four areas are of immediate importance:

One; the US needs to come up with, and publicise, the contours of a relationship with Pakistan beyond the narrow confines of the ‘war against terrorism’. Is there a day after? What if this so called war ends? As long as there is no vision beyond the ‘war against terrorism’ vested interests in both Islamabad and Washington will ensure that a war that makes them relevant or influential will continue.

Two; It needs to rethink its long term strategy in Afghanistan. Since December of 2001, 67 months of military conflict have passed with one clear result: resistance and a sense of failure have increased. The Senate resolution 34 of January 2007 on Afghanistan, pointed out that over the last 12 months the roadside bomb attacks doubled, incursions across Pak-Afghan borders and the frontal attacks against the US and allied forces tripled, suicide attacks quintupled and the poppy cultivation significantly increased.

It is high time for the US to ask this honest question: Is the continuing rot in Afghanistan merely the result of ‘safe sanctuaries’ in Pakistan’s tribal areas or does it reflecct a deeper malaise, of gaps and holes, in the power sharing arrangement in Kabul? Can something be done?

Three; as Vali Nasr, the senior fellow at the ‘Council on Foreign Relations’ had recently argued, in the Christian Science Monitor, after the appearance of the ‘National Intelligence Estimate’ that if the US wants the whole hearted support of Pakistani establishment in the war against Taleban, then it also needs to safeguard the strategic interests of the Pakistani state in Afghanistan.

And they include: preventing the southern Afghanistan to be used by the Baluchistan Liberation Army (BLA) and other interests for insurgency inside the Pakistani territories; the inclusion of pro-Pakistan Pashtun elements in the Kabul regime and most importantly an acceptance of the Durand line as the frontier.

Washington is fully capable of delivering on all counts; but for some reasons it does not.

Four; the US can play a crucial role in the political party reform in Pakistan. At the moment except for the ironic exception of ‘Jamat-e-Islami’ no political party (including the so called moderate or liberal democrats) has any visible, transparent and meaningful process of elections, selections or decision making in place; most are little more than personal fiefdoms.

The US has often talked of its interest in such political reform but now it has a fair chance: PPP’s Ms Bhutto is a continuing beneficiary of the US diplomacy behind the scenes; any political reform inside her party will compel all others to follow suit.