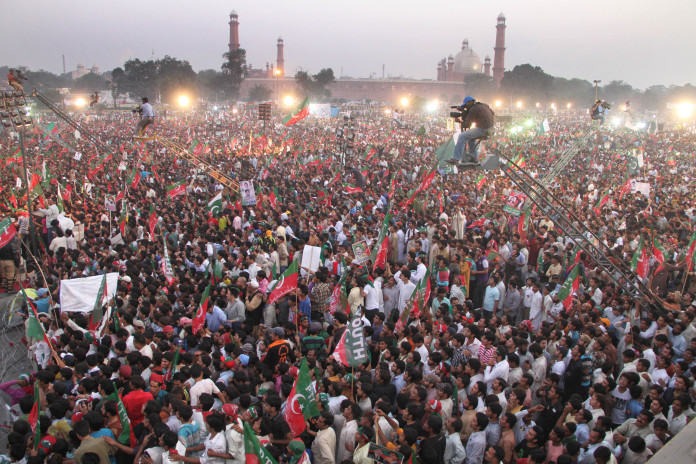 Imran Khan did not have the charisma of Zulfikar Ali Bhutto or the oratorical skills of Benazir, but what he had, in his simple straightforward words, was something different

“Bliss was it in that dawn to be alive,
But to be young was very Heaven! O times…”

Is this not how Englishman William Wordsworth had once summed up his feelings about the French Revolution? But forget about the English and the French, and let’s be honest for once, let’s put those pretensions of cold logic and those million cautions aside and let’s admit: is this not how most of us felt when we saw thousands and thousands of young fearless Pakistanis, stretching as far as the eye could see, waving and singing and dancing along with Shehzad Roy and Strings in PTI’s rally in Lahore? You may not like to admit it but let me admit: this is how I felt; tantalising, tingling sensations of love and joy travelled along my spine; there were moments when I uncontrollably laughed and there were moments when I helplessly cried. But these tears rolling down my cheeks were tears of happiness and relief for the whole of my life from pre-school days till now was flashing and dancing in front of my eyes. And for the first time in many many years — I have lost count how many — I felt that we in Pakistan are neither idiots nor zombies and nor some forgotten children of a lesser God with limited imagination but part of the living humanity of this beautiful blue planet and we have hope!

Imran Khan — whom our mentally challenged liberal elite, in their thinly disguised desperation to appease Washington, had often referred to as ‘Taliban Khan’ — now slapped them with a political rally that made all the difference. It had young men, it had beautiful Pakistani women, it had innocent children and it had music. And these men and women and children entered the historic Minar-e-Pakistan not as bonded or captured Kunta Kinte slaves of Alex Haley transported in commandeered and hijacked public transport forcibly seized by the factotums of the Punjabi bureaucracy but walked on their feet, with poise and discipline, as free humanity. Before and after the American Civil War, researchers and the captains of industry found out that free men are more productive than slaves. The electric enthusiasm of these Pakistanis drawn to the message of a cricket captain also made it clear that they were there for they believed in something; perhaps it was their revulsion to sickening corruption, perhaps it was their desire for national self-respect or perhaps they just wanted to break the cancerous inertia of Pakistani politics, but one thing was clear: these baby boomers, children of Pakistan’s demographic dividend, want change.

The primary assumption of Pakistani politics since the 1980s is that the Pakistani public and voters are some sort of pre-Neanderthal idiots; the secondary assumption is that they will always remain so. It is this duo of assumptions around which the politics of ‘notables’ and ‘electables’ is built. A smart, mature, wise Pakistani politician is thus one who firmly believes in this and preaches the opposite. He knows that elections have to be won by managing a system of petty spoils, biradaris (clans), pirs (holy men) and sajada nasheens (hereditary pirs) and that is why thanedars (policemen), patwaris (land record officers), superintendents of police and district officers are so important to him. This is why a typical winning politician has no need to invest in developing any systematic view of public welfare at the national level. And this is why today none of the major parties has any political message, any national narrative, any idea worth appealing to anyone whose IQ is more than 40. In short, since the 1980s Pakistani politics has no defining ideas that can connect almost 200 million people divided across barriers of age, education, awareness, ethnicity and sectarianism.

This is where Imran Khan’s speech at the Minar-e-Pakistan becomes a turning point in Pakistani politics. I could feel that he did not have the charisma of Zulfikar Ali Bhutto or the oratorical skills of Benazir, but what he had, in his simple straightforward words, was something different. He did not spend much time in blasting Nawaz or Zardari, whom he referred to as leaders of the past. Instead, he used his rather brief speech to hint upon a politics of ideas and issues. No doubt abolishing the patwari system or reforming the police are easier said than done, but he has laid the ideas or their seeds on the political table. The absence of usual demagoguery was also remarkable. Pakistani politicians, bereft of overarching ideas, have always gone overboard when they talk of Kashmir, of India, of the US, especially when a pulpit is set in Lahore. But Imran chose his words carefully; no liberation of Kashmir, no befitting responses to India, and no demonisation of the US either. On every issue he said something measured, which made sense and resonated with the demographic dividend spread all around Minar-e-Pakistan and those countless millions who were connected through television screens all across the world like one single organism.

What will happen? Electoral politics does not change overnight. For the PTI and Imran Khan, and Pakistan’s baby boomers, there is many a slip twixt the cup and the lip. And they have lots of genuine learning to do. The Lahore power play was an effective demonstration of the innate appeal of their message, their ability of strategic communication and their administrative skills, but much more is needed, for the task to rid Pakistan of the politics of non-sense is humungous. Those piranhas of Pakistani politics whose teeth are deep into the flesh of the Pakistani people and their pockets will engineer anything conceivable under the sun to woo their vote banks to maintain their stranglehold on Pakistani politics and the economy and this moment in Lahore has shown them the ‘nightmare trailer’ that will now kickstart a new behind-the-scenes campaign to contain Imran Khan and his demographic dividend.

But one thing is certain: politics will change. The PPP may be able to manoeuvre and shield its safe vote banks in interior Sindh and the Seraiki belt from this new wave in politics but what about the PML-N? Whether Nawaz and Shahbaz have realised it or not, after this PTI power play in Lahore, PMN-L stalwarts are standing in a Turkish hamaam (steam bath) without towels. For three years they had chosen careful rhetoric to painstakingly build an identity around anti-Zardari sloganeering, against corruption and for hyper-nationalism, but the practical demands of politics and repeated compromises drained all credibility from their strategic communications and now a new untainted entity has emerged representing all what they had stood for. Today the PML-N leadership stands upon a dead heap of old loyalties and expectations of the spoils, but in weeks and months the emerging sense of change will trickle down across the Punjabi towns. Shahbaz Sharif’s recent mantras of Habib Jalib and his inability to understand that he does not fit into Jalib’s revolutionary context only showed how seriously disconnected they have been from the emerging reality around them. It is time for Pakistani politics to pause, readjust and reinvent itself. This is what Imran Khan and his followers have achieved in Lahore.