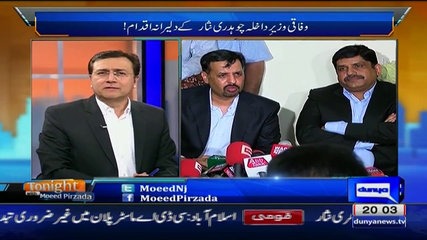 Dr. Moeed Pirzada along with famous investigative journalist Rauf Klasra in his first part of program analyzed bold decisions of Federal Interior Minister Chaudhry Nisar Ali Khan and his current statement regarding Pakistan’s Cricket Team tour to India. He said on Saturday that a security team has been constituted and will depart on Monday for India, to ensure that the Pakistani cricket team is provided complete security while participating in the ICC Twenty20 World Cup. He has spoken of security threat to the team during the ‘possible’ tour. Nisar said that it is the responsibility of the Indian government to ensure security of the Pakistani team, as the world cup is an international tournament, and India should ensure that security is provided to all participants. Rauf Klasra criticized some of Chaudary Nisar’s decisions as part of Selective justice.