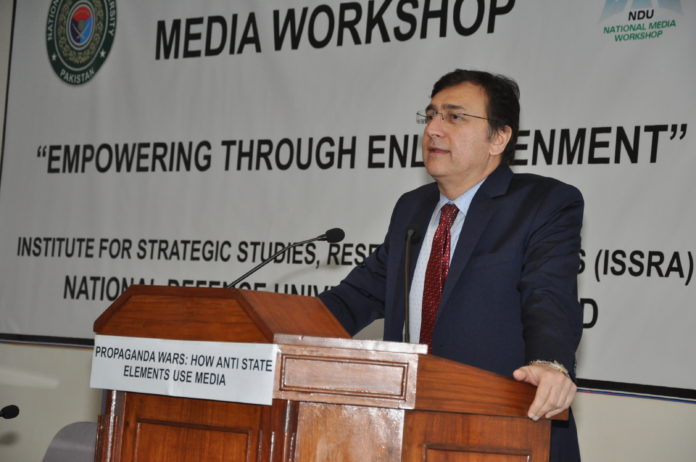 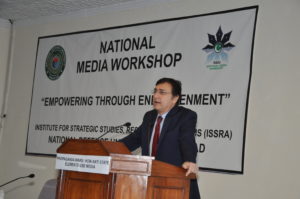 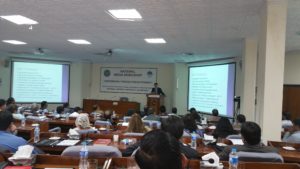 Dr. Moeed Pirzada lectured at the Eighth National Media Workshop at National Defense University Islamabad, on 12th April. Topic of his lecture and subsequent discussion was: “Propaganda Wars: How Anti-State Elements use Media”. Dr Pirzada explained the history and concept of propaganda with the help of powerpoint slides, video clips and short extracts from films and documentaries. He initiated by showing some mind wobbling videos of medical procedures where hypnotism was used, with suggestions, for painful surgical procedures without any kind of local or general anesthesia. He explained how ‘Neurolinguistic Programing (NLP) lies at the very root of propaganda and how human mind is susceptible to believe what is repeated again and again in the form of suggestions – and how mass media can build upon this aspect of human mind and consciousness. While NLP and propaganda were always used, even by the ancient Greeks and by religious leaders, kings and generals from times immemorial but it assumed special significance by the advent of industrial technology and development of modern media in 20th century.

Dr. Pirzada outlined the basic goals of propaganda against the Pakistani state and the techniques used by different sides from savvy Indian media to the Islamist Talibans. 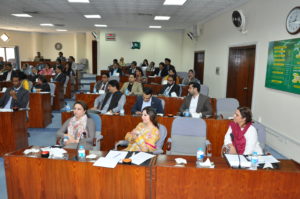 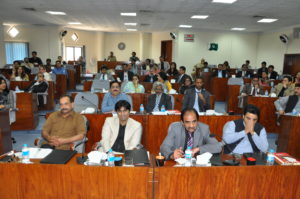 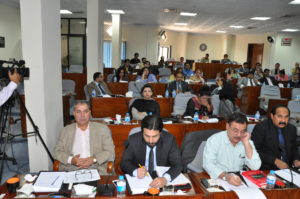 One hour lecture was followed by an hour long heated discussion with 75 participants who were selected from amongst hundreds of applicants from media, universities, think tanks, political parties and civil society organizations. Several civil servants and parliamentarians – MPAs’, MNA’s and Senators – were also among the participants. Discussion remained focus on the issues and techniques of narrative building, why Pakistan is mostly defending itself instead of presenting its own ‘forward narrative’ and what can be done. Dr. Moeed Pirzada also mentioned Shafqat Hussain death penalty case where by an anti-terrorism court sentenced him death penalty for kidnapping and killing a seven-year-old boy in Karachi in 2004. He asserted as how International NGO’s used this case to build a image and drew international attention as Pakistan was hanging juveniles but in reality he was an adult at the time of his conviction. 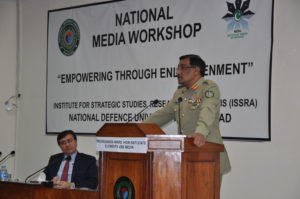 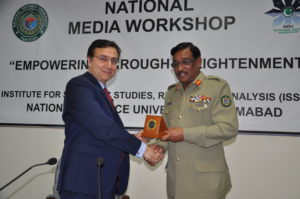 Dr. Pirzada emphasized upon the autonomy and depoliticization of state institutions like Pakistan Television (Ptv) and PEMRA. While commenting on Anti-State propaganda he critically differentiate the popular myth of mixing State with Government. He asserted that it is high time that Ministry of Information be either scrapped or seriously reformed. DG ISSRA, Maj. General Noel Khokhar summed up the discussion and offered his comments in the end and then participants continued the discussion at lunch.