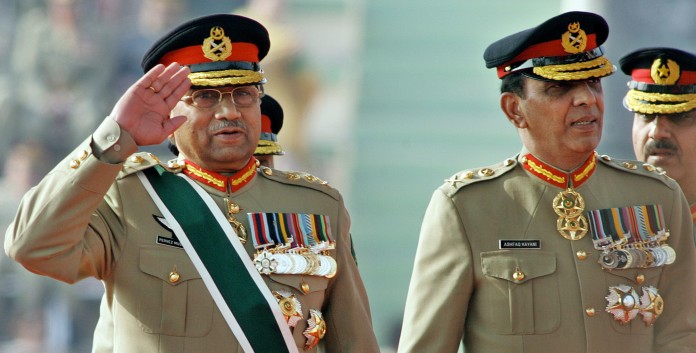 On November 28, the Pakistani dictator finally decided to shut the doors to the most colourful wardrobe in the land. In an auspicious celebration, General Pervez Musharraf became civilianised, so to speak

Since 9/11, my biggest fear was that he might one day disappear in a thud of flesh and smoke — along with his uniform. So his departure from the post of the Chief of the Army Staff (COAS) with a guard of honour rather than draped in the national flag is most welcome. I am relieved.

But this is it. The general continues as the president with the support of the armed forces, blessings of the mentors in Washington, a divided political field, an emasculated judiciary and a tamed media. Armed with this colourful bandwagon, he now heads for another managed election to choose a showcase parliament to cheer him for the next five years.

Where does this land us? And one may wonder, what happened to the civil society movement; the assertive judiciary and the powerful media?

Many still argue that, irrespective of whatever happened since the imposition of emergency-plus or call it martial law, the civil society movement has strengthened. I would beg to differ. There has to be a difference between romantic idealism and realism. And in the interest of realistic assessment, we need to accept that the general and his advisers have played this innings well: their understanding of the ground realities was superb; their analysis of the triangular nexus between the judiciary, the civil society movement and the media was correct and their promise of ‘electoral goodies’ achieved the necessary faultlines in the political field. No wonder then that with the skill of a ‘Rommel’, and fighting with his back against the wall, our general has secured the arena the way he wanted — at least for the time being.

In the spirit of sportsmanship — though the most popular sports channel is still banned — we may even congratulate the general and his team. After all, this is “fighting in-house”. If a few bottles of forbidden spirits are being popped in Islamabad or in Pindi, then they are well deserved. The media and the judiciary are the losers in this round but whereas the media has the intrinsic ability to quickly spring back, the judiciary is consigned to the trash can for the long haul. Since civil society needs an independent judiciary, this then is the real loss.

If the struggle of the civil society was against the person of Musharraf, then no doctor can offer the kind of powerful analgesics that might be needed to cure the itch at this stage. But if it was for something higher, rest assured that the reversals are temporary; if anything they were expected and like all struggles against authoritarianism, they might be a blessing in disguise.

Transformationists and revolutionaries, especially in Pakistan, often refer to the story of the French revolution. But if they spend some time beyond the editions of college history or the CSS curricula — beyond Rousseau, Robespierre, Marie Antoinette and guillotines — they will realise that the revolution gave way to chaos, and more authoritarianism. France convulsed for another century. Monarchy returned again and again and whatever was finally achieved was a result of painful slow, small step evolution. And even then the evolutionary England did better in many respects — if not all.

Musharraf as a civilian president — despite all advantages he enjoys vis-à-vis an ordinary officeholder — is nevertheless a great step forward for the civil society. It redefines the nature of the struggle against authoritarianism. We must not forget that the struggle is not against individuals; it is for the principle to restrict the arbitrary use of executive authority by the state and non-state actors. Individuals inevitably become symbols of hatred just as they become symbols of resistance and heroism; but in the end they are mere symbols.

Musharraf, the all-powerful civilian president and the focal point of state authority, provides that symbol against which a struggle to restrict executive authority can be waged. Bhutto and Nawaz, Qazi Hussain and Imran Khan, lawyers and the media, students and the NGOs and not to forget ace anchors like Talat Hussain and Hamid Mir are all part of that battle. No doubt Musharraf will have the backing of the armed forces — and for a while of Washington. He has been their most colourful and internationally renowned and approved –if not respected — brand name. But it is up to his opposition to strategise how they drive a wedge between him and the army; how they limit him and how they cut him to size.

But Pakistan and the civil society can win if the struggle yields a “civilised” rather than a merely “civilianised” executive; a state authority restricted by the rule of law that can then encourage organic restraints on the endemic use of violence that characterises Pakistan, from Khyber to Karachi. Replacing Musharraf with an absolutist Bhutto or Nawaz in the end or someone in the same mould will be another failure — a repeat of the past. But before you misunderstand: this is not an argument that Bhutto or Nawaz should not be at the top; this is to argue that the top needs to be trimmed and redefined.

Surveys a few years ago found that many Pakistanis approved of suicide bombings; they were probably then reacting to the asymmetrical nature of power politics in the Middle East. But recent surveys show a rising abhorrence of such tactics — asymmetrical or not. Confronted by the horror and ugliness in their backyard, perspectives in Pakistan have changed.

Similarly, the repeated emphasis on the phrase, “rule of law”, in Pakistan represents an organic development — a desperately felt need of the system; this then perhaps for the first time is more than the clichéd use of the term. Amit Pandya, the US scholar from Stimson Center, was not merely using the words when he recently felt, across Pakistan, a palpable desire for the rule of law.

But the struggle to restrict the executive cannot be waged the way many in the civil society or the lawyer’s movement thought it possible. Picking up a straight-unto-death fight with the office of the president or the prime minister will never work. Till the beginning of the 21 st century, it didn’t even work in the United States or the UK; yet one after the other the civil rights movements in these countries have further diminished the executive. We need to choose our targets carefully.

For instance, I think someone like Imran Khan, with his profile and domestic and international good will , would have achieved greater results if ten years ago he had decided to devote all his energies for the cause of public education rather than becoming controversial in the muddy waters of the mainstream politics. The media in near future, with sustained focus, can successfully reform the regulatory regimen through which it is being threatened and misgoverned. And media, lawyers and the civil society together have to strategise how to wean and resurrect an independent judiciary from the mess we are in now; this despite the fact that in all probability Musharraf will be around for a while.