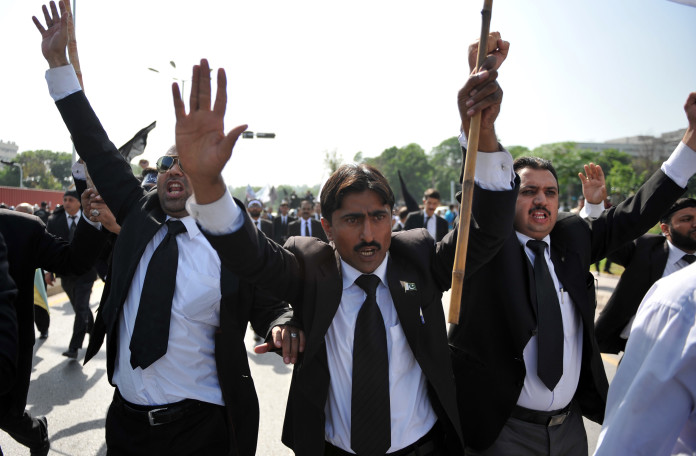 Words are not just words. They are powerful symbols and often pregnant with historical images. And the genie of those images may un-bottle itself to play havoc. That is why I wonder in amazement as to what is the true meaning and perhaps more importantly what will be the implications of Pakistani lawyers’ long march on Islamabad?

Aitzaz Ahsan, the unquestioned architect of the Lawyers Movement, is more aware of the history of 20th century than most others who are commenting on the Long March right and left and must have given some thought before deciding to borrow this historic term. Yet it appears the tiny incongruities between the two realities might have escaped his attention.

The Long March of Mao Zedong and Zhou Enlai was a massive and long military retreat by the Red Armies of the Communist party to escape the stranglehold of Koumintang; only one fifth survived the hardships of battle, weather and terrain.

The televised saga of Pakistani lawyers could not have been more different. In our minds, the Long March represents travails over distance and determined struggle but also some form of advancement and attack to victory. And that is precisely what the Pakistani lawyers ably assisted by the media are trying to implement. Some comparisons will help to see the interesting contrasts.

Mao’s communists were running from the prospects of annihilation by Chiang Kai-shek’s troops in the south to the safety of north and west. Pakistani lawyers are advancing from the south, in air-conditioned sport utility vehicles, enjoying the hospitality of Pakistan’s largest provincial government- Punjab- in full glare of 24/7 electronic media against a besieged President Musharraf and the PPP-led federal government in the north that is hiding itself behind red, blue and yellow shipping containers and barricades.

At times it is obvious that TV cameras are straining hard to give an exaggerated view of the marching lawyers whose ranks are swollen by the large presence of media and security personnel. Not only this, but when a panicked government in Islamabad asks its largest federating unit to send police reinforcements to beef up the security in the capital, the Punjab government politely refuses.

But ironically the contrasts do not end here. The Pakistani lawyers, through their Long March, are trying to restore a sacked judiciary and the spirit of constitutionalism; and are striving to impose the will of the civil society. What about Mao Zedong and his comrades?

Communists in 1930?s were struggling to establish a new social and economic order which when they finally did lead to one of the worst and most tyrannical dictatorships in twentieth century. True, their revolution led to large scale economic development and betterment and ultimately evolved into a welfare state and in the last two decades into a thriving civil society- but as the realists will argue it essentially passed through a long and painful dictatorship — but isn’t this what Musharraf and his team have been arguing all along?

The overall context also needs some attention. The lawyers brigade, and its accompanying media-created extravaganza, is advancing on Islamabad at a time when Mian Shahbaz Sharif has taken oath as the Chief Minister of Punjab inspiring hopes of better administration. Prime Minister Yousaf Raza Gilani and kingmaker Zardari were both in Saudi Arabia where before offering Umra, they were begging the Saudis for deferred payments on oil transactions.

Pakistani envoy in Washington is trying to arrange other support funds; budget was being presented in which it was accepted that whereas rising costs of oil have ballooned the deficit for the first 10 months from $11 billion to $17 billion, the food inflation is at 15 per cent and economic growth has slowed from 6.8 per cent to 5.8 per cent.

This context should focus our minds on larger realities but a spokesperson for the lawyers movement was seen and heard arguing on a popular TV programme that under Article 6 President Musharraf should be impeached and executed.

Interestingly, all those enamoured of the spectre of Musharraf being impeached have predetermined the outcome as well. What if given the eccentricities of his personality and stolen spirit of Mustafa Kemal Ataturk he decides to contest the charges against him? All impeachments don’t succeed.

Let’s not forget that despite all the money that Kenneth Starr and the Republicans burnt, the more juicy details of the Clinton’s relationship with Monica Lewinsky were never proved for reasons of law. And yet the televised impact of that impeachment drama made most women in America fall in love with that warm-hearted lover: Bill Clinton. Sometimes you get the opposite of what you desire.

Aitzaz Ahsan, the writer and the astute student of history, must not forget that there is also a law of unintended consequences. The success of the historic Long March was that it enabled Mao Zedong and Zhu Enlai to establish themselves as leaders of the party and revolution. The lawyers movement will ultimately be a great success of the civil society if it forces Musharraf to retire on the edges of Bosphorus and imposes a rule of constitutionalism in Pakistan but someone else will be succeeding if as a result of all this the PPP government at the centre falls prematurely.

He will remember Tudeh party and the leftists were the ones who braved Savak and had an important role in undermining the Shah regime in Iran but it was Ayatollah Ruhollah Khomeini whose brand of governance succeeded. The good barrister, even as he enjoys the hospitalities on a warm summer during the march, needs to look over his shoulder.