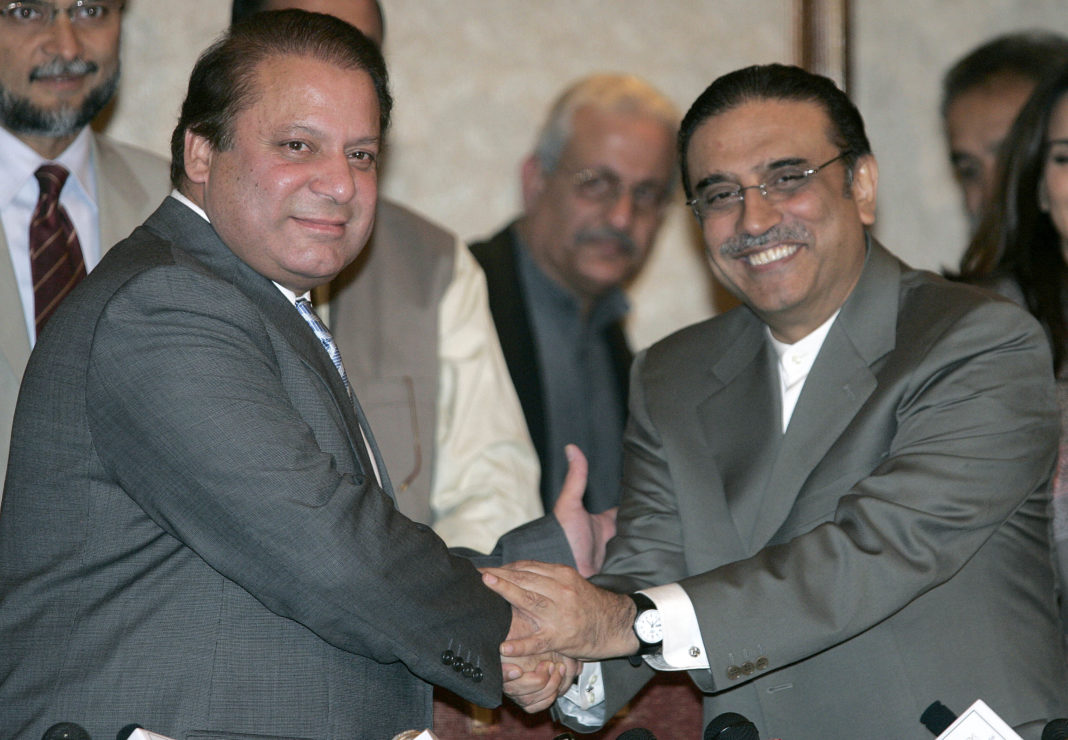 Many of us remember the ‘All Parties Conference in London’ in the July of 2007. Then it was supposedly an alliance of the democratic parties against the dictatorship. Many of us believed it; though I am sure there were ‘wise old people’ around who knew how to interpret all that gala affair – the real meaning behind the fancy words. But Much water has flown under the bridge since then. And hindsight is always 20/20. Now reflecting back, we can safely say that it was a’Grand Alliance of the Criminals and Crooks’ against the ‘people of Pakistan’

What was behind that grand alliance? It had an interesting troubled history. Sharif family – and what later became PMLN – had inherited the mantle of Gen. Zia’s barbaric regime. Zia and cohorts had hanged Bhutto; by the end 1980’s it was becoming obvious that despite all the machinations of military rulers, PPP and its hitherto charismatic leader, Benazir Bhutto (who later lost most of her charisma under the stink of corruption) was a force to reckon with, and would spring back to power sooner or later. Sharif’s were then cultivated as the ‘bulwark’ against the PPP, against its supposedly left of the center politics and possible revanchism by Benazir – whose father was hanged by Gen. Zia and Company.

Given these dynamics, Sharif’s were born in politics as ‘congenital enemies’ of Benazir Bhutto and PPP. And then, before the ‘democratic awakenings’ of 2007, they had no qualms about it. They inherited Gen. Zia’s mantle, accepted it obediently and faithfully, and played a huge role in reducing and containing PPP in Punjab. The decade of 1990’s was thus a period of ‘dirty fighting’ between the two political entities; descendants of ZA Bhutto represented by Benazir and political offsprings of Gen. Zia in the form of Sharifs and PMLN. Meaningful truce was thus not possible; it was not practical, it made no sense. Both sides tried fighting like two wild wrestlers, who push and pull, drag and scratch, kick and bleed each other in the hope of knocking out the other – out of the ring for ever. Rehman Malik lead investigations, in 1993-96 which have provided the bedrock to the ‘Panama Files’ and Senator Saifur Rehman’s hiring of international detectives to expose ‘SGS/Cotecna’ corruption of Benazir and Zardari that became famous as ‘Swiss Cases’ was all part of that belief that we will knock out the other out of politics – and will then rule for ever.

It did not happen. Something else happened. While both sides were kicked out of power twice, in a trilateral struggle for control between them and the military establishment. It was not what made their minds. At least the final crystallization of strategies, the final  realization of ‘what we should do’ came later. It was the arrival of ‘Gen. Musharraf’ on the horizon who instead of playing the old game of ‘bringing the other in’ thought of himself as a ‘messiah’. Benazir who welcomed Nawaz’s ouster and held out an ‘olive branch’ to Musharraf, tried her level best to rekindle her fortunes on the ‘misery of Sharifs’ but was rebuffed by Musharraf, who had ideas of his own and who went on creating a ‘third pole’ of politics through the Chaudhries and PMLQ.

Benazir, who had become, courtesy ‘Swiss Cases’ a ‘persona non grata’ in the west, finally landed in Washington, in early 2006, with the plea that ‘Musharraf is playing double games in Afghanistan; and I will serve American power more faithfully under the banner of democracy’. A quintessentially flawed and immoral plan, viciously supported by many in the media and civil society, that manifested itself in the form of Pakistan’s most infamous political deal: The NRO. But Benazir was less interested in joining Nawaz; her power base was Washington. But this credit goes to Nawaz that he persuaded her to create a common front against Musharraf – at least she created the optics. Till her death, she the astute politician, was not much impressed by Nawaz’s ‘common front’ theory. For her, all that was a ‘convenient for the time’ tactic to empower her. Nothing more than that. And she considered ‘lawyers movement’ Nawaz’s illegitimate baby financed from London.

But painful time in jail and the misery of solitude of Saroor Palace had convinced Nawaz that the real enemy is ‘Pakistan Army’. And if he collects Benazir, PPP and all others under a common banner of democracy (not that he cares an iota about it) against the army then they can together rule for ever. This mentality, this framework, this idea defined and fueled the Pakistani politics from 2007 onwards – and finally lead Nawaz to fall like a teenage girl in Modi’s tight embrace. Benazir died at the hands of ‘mysterious killers’ but Zardari who inherited her power, her politics, her everything continued with the deal. The politics of past nine years, often derided as the ‘muk mukka’ was essentially based on the principle that ‘together we survive’.

Occasional skirmishing was essential to fool the public, to give ‘masala’ to the media and to create impressions of ‘distinct political entities’ which is needed for the game of elections. But while it is always possible to fool the majority endlessly, the real challenge is to cheat, confuse and split what is called the ‘aware citizenry’. This also worked well initially – thanks to many in the media, legal community and civil society – but with the advent of Imran Khan’s PTI as the third entity of Pakistani politics, this became increasingly more and more cumbersome and more and more difficult. And by now almost all, who have some functioning brain cells or some molecules of integrity could see and spell out that Nawaz and Zardari could have different bodily forms, dress sense, tastes of cuisine or woman but they both represent the same pole of Pakistani politics.

But the million dollar question is: Will they be able to fool the ‘aware citizenry’ once again? True, the genie of ‘mammon’ is out in the air again,those who pleaded the virtues of NRO for saving democracy, those who described ‘lawyers movement’ as a ‘revolution’, those who demonized the 2014 movement against the rigging in elections as ‘attack on democracy’ and the ‘social media teams’ paid by national exchequer will again be assembled, marshaled and paraded to cry mantras of ‘democracy under attack’ but will they be able to fool countless young men and women again?

‘Yeh tu wohi jaga hay, guzray thehy hum jahan say’! Reflecting back, after nine year, on ‘All Parties Conference in London’ in July of 2007, we now know one fact for sure: it was many things but it was not for democracy. It was an ‘Alliance of the Crooks and Criminals’ against the best interests of the people of Pakistan. It was an arrangement to make few families more and more rich, powerful and politically entrenched. It was a conspiracy to stifle new political growth, a conspiracy against democracy in the name of democracy. It was ‘rape in the name of love’.

Will they be able to fool us again? Will they be able to distribute the goodies to split the public opinion again? Panama Files has landed upon them from the skies; its not  possible to sell this as an ‘establishment plan’. And thanks God, ‘khakhis’ are not visible any where, for their ‘brain waves’  are capable of causing more harm than good. Panama Files implicates both of them: the Doctor and his patient. Dr. Zardari, suffers from the same malaise, same pathology, same itch; how can he treat, put balm and bail out his ‘most desperate patient’?. This remains to be  seen. This moment is not a test for democracy; this is a test of our ‘common sense’.