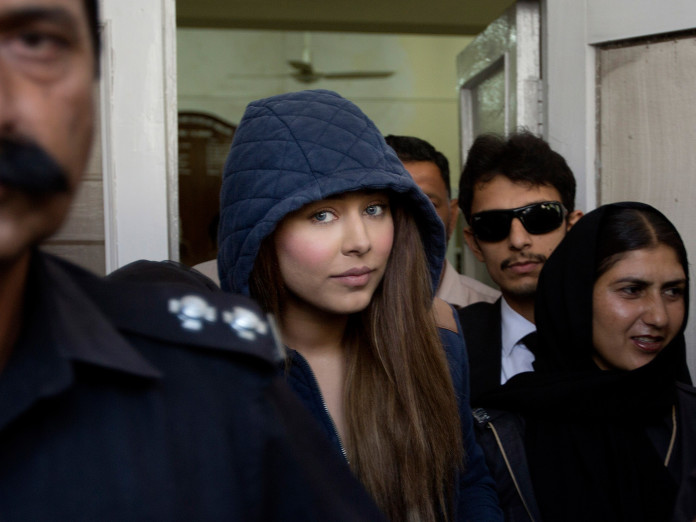 Tale of two Cases; Axact & Ayyan Ali – Nothing offers a bigger contrast to understand the priorities of Pakistani political and media elite and of the whole governing system.

In case of Axact, Minister of Interior acted like the hero of ‘Fast & Furious’ and media persons especially from the top suddenly discovered an unlimited reservoir of moral outrage against the fake degrees. Ironically some of them may have far serious and proven cases of corruption pending against them in government files. But right now they are all aligned with the government under the old principal: Enemy of my enemy is my friend.

Together with the government media tycoons are busy digging, inventing and reinventing the “weapons of mass destruction” only this time they are called “fake degrees”; quintessential American term “diploma mills” is suddenly our biggest concern while half of Karachi is without drinking water.

Now shift the scene. Today Ayyan Ali appeared in a court for the 8th time. She was arrested on 14th or 15th March from Islamabad airport with $500,000/- in her possession. This almost shouts of money laundering. Her initial statements to media – widely reported on tv and printed in major papers – was that money belonged to Khalid Malik; Customs found out that she had traveled abroad 43 times in last two years, something like 83 times in last five years. It was soon discovered, which everyone believes privately and publicly, that powerful politicians are running a money laundering racket which connects amongst other things with the “gray traffic” which runs into billions and billions. If Ayyan Ali alone carried $500,000 each time then in last two years she would have money laundered Rs. 250 crore. Media found out that PA of a top politician and office holder brought the bag for her and he was seen with her in the lounge. But Ayyan Ali is not alone; reportedly there are scores of others engaged for this laundering business.

Eight weeks have passed, no proper investigation has been done or presented in the court. Case is only being dragged to finally grant her a bail. Media follows her not to find facts but to have a stealthy look. She kept on changing her positions; but no one has been questioned; Khalid Malik is off course above law. But a very basic investigation would have checked her claims. Who were the persons she said she sold her plots for Rs. 5 Crore? Were the plots in her name? Did she buy plots? When? How she paid? What are her revenues from her fashion shows? Do her revenues and incomes match her bank statements? How much she has been spending on her credit cards? How much she has spent on buying air tickets? did she travel business class or economy? Was any one sponsoring her? Do her trips correspond with fashion events held abroad which she attended? How long her trips were?

Nature of this investigation and scope demands that Customs get support from FIA or IB, but Interior Minister, our new hero of “Fast and the Furious” seems not interested nor is anyone else in the government or opposition – not even poor FBR that just discovered that Bol’s heavy equipment is not duty paid. (so that another excuse can be found to stop broadcasts) All have accepted that it will be extremely discourteous to unearth the “Money laundering Racket” behind all this. In the end all are friends, and stake holders. You scratch my back and I will scratch yours.

But what about the media? media that is busy inventing new facts, definitions and startling revelations about “fake degrees” is only interested in Ayyan’s good looks, her youth and fashion and her costumes. News bulletins look like fashion shows from court – Has any media platform or even newspaper has deputed a few reporters to find out whose money Ayyan Ali was carrying? What is the quantum of money laundering by carriers? How is it connected with the gray traffic? Who is collecting money from gray traffic now in this govt? Is all this not interesting? Is any powerful Editor of a large paper that has many reporters concerned about this? All questions above for FIA also apply to media houses. Why media is not interested?

Did I mention in my last post that a media aligned with government can be anything but it can never be the “free media”?

We discover ourselves in love & hate! Axact crisis has exposed the moral bankruptcy of Pakistani Media. It has shown us our true faces in the mirror.

Yes! may be Bol won’t appear but it will be a Pyrrhic victory for many powerful men in media for what they don’t realize is that the crisis is driving a wedge between the general public and media.

Media drive agendas on the myth that they are about “public interest” or “collective good”; rich businessmen only derive the legitimacy of controlling media empires for men and women in front on the screens are considered intellectuals, free spirits operating in “public sphere” that permits them to take shots at governments, state and church. If media expose them to be nothing but a club of powerful men joined together and working in collusion with a government against their common enemies then the very essence of free media dies.

Governments can control and discipline the capitalists, however big their factories and buildings may be, through their bureaucracies; its the “robust public sphere” that defends media from the power of the state. Collusion of media with the government is the end of “public sphere”. Time to wake up!

There were days when two English papers had 90% of their stories about Axact; one day a leading English paper on its front page had 13/17 stories about Axact; little did its editors realized that hatred of Bol and Shoaib Sheikh have ruined them in the eyes of their readers. News stories are full of exaggerations distortions and outright lies. Facts are being manipulated and when needed: invented to mislead the readers and viewers. TV newscasters – young smart men and pretty women – falling out of their chairs, trying to beat each other in showing excitement in taking cheap shots at Axact’s CEO so that they can please their own Seths; this theater of absurd reached its climax when a News Channel turned prominent media persons into mice running from the sinking ship of Axact. News media are already degenerated over the years to such an extent that no one in the newsroom or those who protested in media realized that such an item, if it fits at all, could fit only into a comedy show and not “Headline News”.

Many professionals have started realizing the ridiculousness to which this crisis has lowered our standards, others will realize soon that in a Faustian bargain for power and security they have lost what defines them: their expression; the ability to differentiate between right and wrong and to be able to take a stand on it. Media aligned with the government – however glossy top you may put on it – are not “free media”. Power of the financial interest is not the power of the media. Never before was threat more great to “free media” as it is now. Its time to open our eyes! Amen!