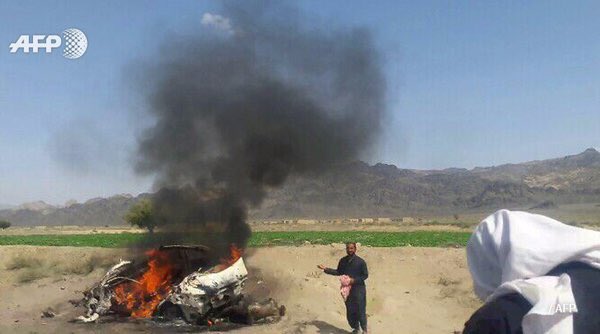 US State Department’s Question & Answer Session with Media, on 24th May 2016

Discussion is about the Killing of Mullah Mansoor Akhtar; killed in a US Drone Strike, by the orders of the US President. What is surprising is that the State Dept Officials cannot even confirm to the US based media where exactly Mullah Mansoor was killed; or if the man killed in Noshki attack was indeed Mullah Mansoor or if the attack in Noshki was indeed the drone strike the whole world is talking about. (because those on ground are not convinced that the damaged car was hit by two hell fire missiles; looks like a RPG attack) – but the most frightening thing comes at the end; Mullah Masnsoor was not on the ‘designated terrorist list’; he was actually someone US was negotiating with through the QCG or Quadrilateral Dialogue. Will history’s greatest power not even respect the basic principles of warfare and conflict established over thousands of years?

QUESTION: — has Pakistan officially responded or protested to the U.S. on the strike?

MR TONER: Has – I’m sorry, I missed your last part of your question.

MR TONER: Right. Well, again, I’d refer you to the Pakistani Government to tell – to say whether they responded or not. I don’t have any readout to provide or anything like that.

QUESTION: Pakistan says that by doing so, U.S. has violated Pakistan’s sovereignty and also has violated the respected UN Charter.

MR TONER: So a couple things about that. First of all, this was a strike directed against this individual, Mansour, in the Afghan-Pakistan border region. We certainly do respect Pakistan’s territorial integrity, but as we’ve said before, we will carry out strikes to remove terrorists who are actively pursuing and planning and directing attacks against U.S. forces.

QUESTION: One question that falls from that, if I may.

MR TONER: Yeah, sure. Sure.

QUESTION: Was that the motive of this attack or did it perhaps also have a political motive to try to influence the lack of peace talks?

MR TONER: Well, I think – I mean, that’s – it can be – there can be multiple reasons for it, but I think the primary, and the President spoke to this earlier today when he confirmed the success of this strike, that this is about removing someone who was actively pursuing, planning, carrying out attacks against U.S. and Afghan forces in the region.

QUESTION: And then one other one.

MR TONER: But also – I’m sorry, just to finish – it also sends a clear message that those who target our people and the Afghan people are not going to be given a safe haven, and then also that it – that there’s only one option for the Taliban, and that is a – to pursue a peaceful resolution to the conflict. So, sorry.

QUESTION: No, no. There are reports that – that – and they’re not definitive as far as I can see, but that a passport was found near his body but in someone else’s name, and that that passport had been used to travel into Iran. Do you know if Mullah Mansour traveled to Iran, and if so, do you have any idea why?

MR TONER: I don’t. I’ve seen those reports, but no further clarification, no further information, about that.

QUESTION: One more. You said that – when he mentioned Pakistan’s complaints about violation of sovereignty, you said it happened in the Af-Pak border region.

QUESTION: Are you denying that it happened on Pakistani territory?

MR TONER: I don’t have any more clarity of where the actual strike took place. What I can say was in that border region. I just can’t say on which side of the border it was.

QUESTION: So you don’t know if – so are you doubting the claim from Pakistan that it was in their territory?

QUESTION: So you don’t know where you targeted him? You just guessed? I mean, how could you fire something out of the sky and blow something up and kill people and not know what country it’s in? Come on.

MR TONER: I understand what – your question, Brad. All I’m saying is what we’re able – I said what we’re willing to share is that it was in —

QUESTION: You check these things before you fire, usually, right?

MR TONER: — the Afghanistan-Pakistan border region. We certainly do.

QUESTION: On that, what impact this has on the Taliban itself? Can you say it’s defeated now?

MR TONER: No, by any means I wouldn’t say that, and I don’t mean to imply that if I said that. What I think it does send is a clear message, as I said, that if you’re going to carry out attacks, if you’re going to lead attacks against our forces and against Afghan’s forces – Afghanistan’s forces – then you’re going to be targeted and you’re not going to have safe haven. And I also think that it sends the message that the Taliban must decide what its future is going to be and whether it’s going to be part of a peaceful political future for Afghanistan. And there is a path towards that. They can sit down with the Afghan Government and begin negotiations and talks. We’ve encouraged that; we support an Afghan-owned, Afghan-led process.

QUESTION: But how can you expect someone to come to peace talks when you have just killed their supreme leader?

MR TONER: Well, again, I think it presents them with a clear choice. And Lalit, you know that there’s ways to engage and identify the fact that you’re willing to engage in a peaceful way. And, frankly, Mansour showed no – absolutely no predilection towards engaging in any kind of peaceful political process.

QUESTION: From the public statements that’s coming from Pakistan, it’s very much evident that they are very upset with your action. Do you see any kind of retaliatory measures coming out of Pakistan?

MR TONER: No, we – look, Lalit – I mean, I’m – again, I’m not going to speak on behalf of the Pakistani Government, what they may or may not do. We have been in touch with them, obviously. We’ve talked about this airstrike. We continue to talk to them about how we can collaborate and cooperate on rooting out these terrorist organizations and these organizations or these groups that continue to use Pakistanis – Pakistan’s territory to carry out attacks.

QUESTION: Can we move on to —

QUESTION: One more quickly. Was —

MR TONER: One more and then – okay.

QUESTION: Was Mullah Mansour on the terrorist designated list, the —

MR TONER: I don’t believe he was, no.

QUESTION: He was not.

[Note: this is from the transcript of the US State Departments’s media Question & Answer Session of Monday 24th May 2016]