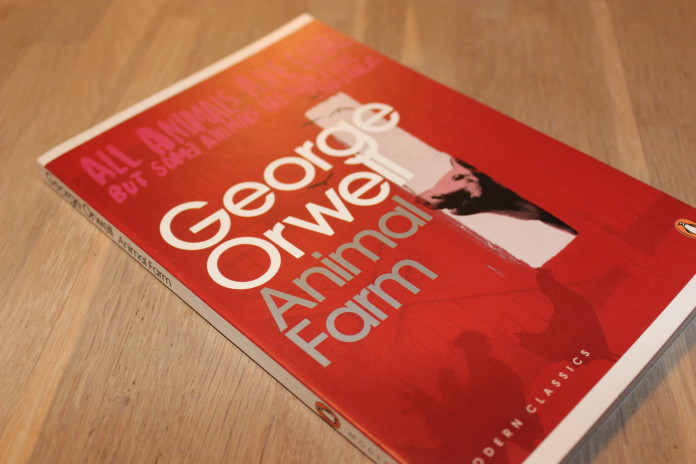 Why you must read: Animal Farm by George Orwell? Let me tell you a short story or call it an example. I had posted a story on my Facebook page from Guardian, North Korea sentences US College Student to 15 years in hard labour, but many on this page wondered: Why was a US citizen studying in North Korea?

No, poor Otto Warmbier, 21 was not studying in North Korea. He was studying in University of Virginia and was only in North Korea for short holidays. US government has strongly advised its citizens against traveling to North Korea; US government has warned its citizens that traveling to North Korea risks arrests, killing and any kind of charge for propaganda purposes. This is also basically a pathetic antic on part of an ‘inhuman authoritarian regime’ the sole purpose of which is to extract some high fly visit from some American politician or administrator or Hollywood star; I am sure, if Brad Bit or Angelina Jolie make this a cause then Otto Warmbier will find his freedom. And I am sure, if nothing works then US government will flex muscles in Beijing to get him released. Charges are a comedy show. North Koreans have accused him of stealing a ‘Political Propaganda Sign’ from the restricted side of the Hotel he was staying in.

But I did not post it on Facebook, because of the apparent facts of this case. Its not about facts; its not about Otto Warmbier; its about principles of human conduct, of behavior and of helplessness of men and women caught in strange situations. Injustice happens everywhere; world is full of barbarism and cruelty and our own rural areas are self-sufficient in these matters. I only wanted to draw attention to the barbaric nature of several regimes and social and political orders across the world. Muslim world tops the list. North Koreans are only doing this to draw US and western attention; they are starved of limelight; they keep on doing pathetic antics to feel alive, to provoke reactions and interest and I have no doubt, being American Citizen, Otto Warmbier, will sooner or later find his freedom.

But this is happening everywhere; and it is happening daily, many times a day in our villages, small towns, at the hands of feudal elite, local satraps and police which apart from its brutality often acts as a tool in the hands of powerful people. And the victims are not ‘Otto Warmbier” they are not US citizens; New York Times, Guardian, BBC and powerful governments don’t react for them. Even when reaction happens, it fails to help them. Do you remember ‘Aamna’ the 18 year old girl in Muzzafargarh, who burnt herself to an agonizing death in front of a police station. She was abducted and raped, and she decided to stand up but police was not registering her case. [today many naive people, many amongst you, think that involving Punjab police and its SHO’s in the internal affairs of families will somehow improve family situations and provide relief; What a level of innocence and disconnect from reality?]

When Aamna died and media shook the system, the mighty man, the Chief Minister of Punjab flew into rage; landing from the skies from a helicopter he ordered arrests of accused, suspension of police officers and compensations. Yes, money was given, government did try but in the end nothing happened. Chief minister forgot, politics and life moved on. When in October 2015, I started this new multi-segmental program, at Dunya TV, this was one of the first issues I discussed. But nothing happened.

Nothing happens, because system does not work. System needs reform. And for reform you need patient understanding and meticulous work. Unfortunately none of that is visible on the horizon. Governments make new laws for winning brownie points from west; media either fails to understand or is totally compromised, result is: ever growing complexity, more injustice, more inequality and more misery. Just today some feudals, in Punjab, unleashed their dogs upon a poor woman, a polio worker. Throughout the day, tv screens kept on showing the images of her helplessness. Arrests will be made, courts will be moved. But in the end, nothing will happen.

I will keep on trying to raise these issues of ‘injustice’ through my blogs, and my programs as much as I can. But understanding of the process of politics is needed; I read across social media and I am often disappointed – tortured would perhaps be the right expression – that how little the youth of Pakistan understands issues of law, politics and society. Let me suggest all of you to take out time and read: Animal Farm, by George Orwell. Orwell, the amazing genius, wrote it in the context of ‘Stalinist Russia’ in the middle of 20th century. But the genius of his work, his writing lies in the timelessness and universality of what he describes of human behavior and relationships of power and politics. How human beings behave towards power; how they submit to aggression; how they are prepared to be mislead by symbolic gestures; and how easy it is to control herds of mankind like sheep once you set into motion a system of fear. Read ‘Animal Farm’ and you will feel like reading about the present Pakistan, Punjab and Sindh and if think of MQM and Altaf Hussain’s politics then it will become all the more easy. Read ‘Animal Farm’ by George Orwell, to understand your surroundings! Best!