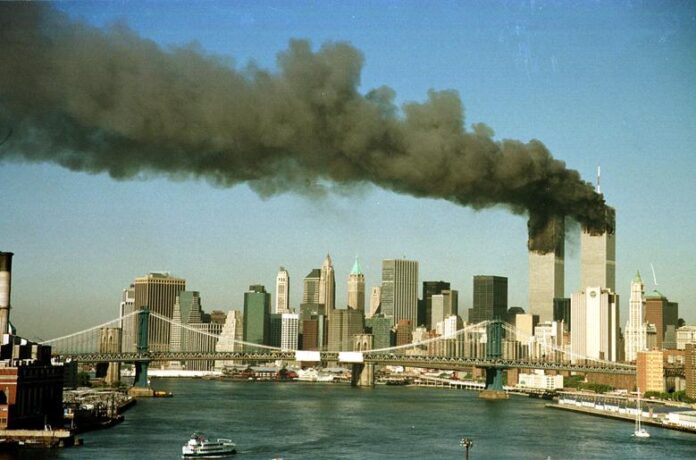 9/11 terror attacks in New York remind us of the darkest day in US history when Al-Qaeda terrorists, apparently masterminded by Osama Bin Laden from Afghanistan, terrorized the powerful US nation and, in the process, changed the geo-political dynamics of the whole world. It was the first physical attack on the US mainland since the British naval raid that burnt the White House in 1812. The tragedy that shook the world started with the hijacking of four commercial aeroplanes from different airports along the US east coast, but the destination of all of them was the same: California. California was selected because the planes bound to it would be carrying a full load of fuel, thus providing hijackers with the freedom to strike their pre-decided targets. American Airlines Boeing 767 struck the north tower of the World Trade Center at 8.46 am and within an hour, the second plane, Boeing 767—United Airlines Flight 175, collided with the Southern tower of the World Trade Centre. The third plane was used to strike the US DOD Headquarters; the Pentagon and the fourth crashed in Pennsylvania – some believe it was shot down by US Airforce. A total of 2,996 people died in the horrific attacks, including the 19 hijackers. The attack gave birth to the phenomenon of the “war on terror” that changed world politics for the next two decades and is still continuing in many ways.

Though 15 of the 19 hijackers were of Saudi origin, 2 Yemenis and 2 Egyptians but the US agencies found the locus of this terrorism in Taliban-controlled Afghanistan. US President George W. Bush ordered an attack on Afghanistan in October 2001 that still raises many questions as to why there was no other option to eradicate a terror entity consisting of a few hundred people – to this day, the US has not been able to establish any credible evidence of the collusion of Afghan Taliban with the tragedies of 9/11. But the mystery deepened with the US decision of “regime change” in Iraq in 2003. US found itself in unwanted and unjustified wars, costing the US taxpayer around $8 trillion. These wars were a result of the Bush doctrine aimed at eradicating the menace of terrorism from all around the globe. Bush took it personally when he stated: Our war on terror begins with Al-Qaeda, but it does not end there. It will not end until every terrorist group of global reach has been found, stopped, and defeated. However, this paradigm had unintended consequences; the whole Muslim world was thrown into chaos. More than a million died in wars in Iraq and Afghanistan and at least 100,000 people have lost lives across Pakistan as blowback to the Pakistani decision to send its forces into erstwhile FATA to help the US operations in Afghanistan. South Asia (India, Pakistan & Bangladesh) and the Middle East remained disturbed for more than a decade and political currents have still not recovered from the consequences of 9/11.

Looking back at the past 21 years, the war on terror, whose objective was to eliminate violence from the world, brought more violence. According to an Aljazeera report, almost 241,000 people died in the Afghanistan war. On the other hand, the first three years of the Iraq war caused 654,965 deaths. The war causalities did not remain confined to Iraq and Afghanistan but affected other states as well. Moreover, the new war paradigm set the precedent of killing suspects based on the flimsiest evidence. Many states – if not all – started to define their insurgents and freedom fighters as “terrorists.” In South Asia, India conveniently labeled Kashmiri resistance as “terrorism,” but the phenomenon was not restricted to India; Pakistan, Bangladesh and the whole Muslim world redefined all resistance to central authority as “terrorism.” In addition to that, suspects were deprived of their rudimentary human rights and, in extreme cases, treated inhumanely. The places like Guantánamo Bay, Bagram Base, and Abu Ghraib prison were famous for it and were run by the US administration. As the owner of the sites, the US is responsible for what happened there and will be remembered as the symbol of terror, violence, and abuse.

The war deviated from its original path because the main objective was supposed to eradicate Al-Qaeda and its affiliates hiding in Afghanistan, but the US got involved in unilateral military campaigns against states that had nothing to do with Al-Qaeda. The Iraq war was one of them that was launched on the false narrative of the presence of Weapons of Mass Destruction in Iraq. It brought misery and deaths to the poor people of Iraq and rendered Iraq into a civil war that shattered the foundations of Iraqi society and its state governance – from which it has still not recovered. Wars in Libya and Syria cannot be delinked from the consequences of US policies after 9/11. Afghanistan met the same fate despite a heavy US presence. US eff orts to install and perpetuate a puppet government failed, and it seems that everything that the US once aspired to achieve – like women’s education, human rights and western style plurality – died when US soldiers left Afghan soil in August last year.

9/11 is a big subject; voluminous books and doctoral theses are required to make sense of its consequences. But within the limitations of this space, if we can bring home the understanding that the human, material and political tragedy that the world suffered – especially the Muslim world – is much larger and humongous than what America suffered. But this point is often ignored. Al Qaeda and Osama Bin Laden, whatever nonsense they believed about the west, ended up further brutalizing and weakening the Muslim world. 9/11 was a Muslim tragedy!