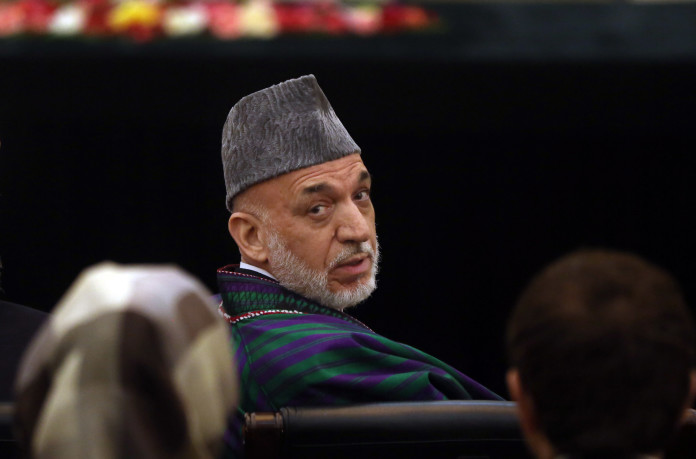 Lies, denials and propaganda don’t change realities. Truth has a nasty habit of sneaking out. And sometimes it even bombards. In the last two weeks it blasted like a hailstorm on Bush administration’s Afghanistan policy.

First it was the Brigadier General Mark Carleton Smith, the outgoing top commander of the British forces in Afghanistan who admitted to Sunday Times in London that absolute military victory in Afghanistan is impossible. This bombshell from the good general soon lost its value with the news that Saudi King has arranged a meeting between the representatives of Hamid Karzai, the Afghan President, and those of Mullah Omar, elusive fugitive leader of the former Taleban regime and that the former Pakistani prime minister Nawaz Sharif, the most popular of the Pakistani politicians, is somehow part of these negotiations.

Whatever doubts could have been there were removed by Karzai himself who offered, in an interview on GEO Television, that he will personally guarantee the security of Mullah Omar if he decides to come to Afghanistan. This was certainly the biggest over-commitment of 21st century in the sense that Karzai cannot guarantee his own security outside Kabul’s green zone and that too with the help of US Special Forces. But let’s move forward as more interesting things followed.

French, jumped in with the leak of conversation between Sherard Cowper-Coles, the British envoy to Afghanistan and Francois Fitou, the French Deputy Ambassador to Kabul in which that top British diplomat predicted that Nato-lead military campaign against Taleban is destined to fail. But this was not all; the British Ambassador went on to argue that the foreign military presence is not part of the solution but that of the problem and that the best solution for Afghanistan would be installing an “acceptable dictator”

General David Petraeus, Bush Administration’s hero of Iraq, who is now taking over the US Central Command from end October, then joined with his own prescription. While speaking to a forum hosted by Heritage Foundation, he said that negotiations with some members of the Taleban could provide a way to reduce violence in parts of Afghanistan.

This was enough for any columnist to draw his or her own juicy conclusions about the shape of things to come but it looks like that the good Americans did not want to take any chances; lest there is any ambiguity. So we had another leak. New York Times disclosed that the draft National Intelligence Estimate (NIE), the first serious compilation of 16 Intelligence Agencies on the situation in Afghanistan, admitted that beyond the cross-border attacks the situation in Afghanistan is a mess created by the corrupt Karzai government that is not capable to stem the rise in Taleban’s influence.

I have always wondered: do leaks just happen or are done to send messages; to shape things along? The leak in Le Canard Enchaine, the Parisian paper, was certainly an expression of the French unwillingness to move along with a war that is increasingly not making any sense to European governments and the media — but then what is the significance of the leak of the National Intelligence Estimate?

I think we now have sufficient meat at the table to conclude a few things: One, US desperately needs a period of relative stability to declare victory in Afghanistan; Two, US and allies have concluded that such period of stability will not be possible without engaging at least some parts of Taleban resistance; Three; this marks the beginning of the end of the regime of President Hamid Karzai in Kabul.

At this point Hamid Karzai’s situation now resembles that of General Musharraf towards the end of 2007 when he was asked to take off his uniform and hold elections with promises of continuing support from White House. No one knows how quickly General Petraeus, Pentagon’s Houdini sets things into motion on this roadmap but the sooner he does the better it will be for everyone: for Afghanistan, for the US and its European allies, for Pakistan, Iran and even the Indians. And trust me this may be the best happy ending for Karzai too: safe with a lucrative future as lobbyist in Washington.

However, what frightens is that while the rational feedback and assessments flow from Pentagon and the Intelligence community there is no end to irresponsible political rhetoric in the US.

If I were George Bush or any of his intellectual cronies or even an ordinary American of any sort that supported all those gory actions since 9/11, and I now look around at: the mess in Iraq, failure in Afghanistan, suicide bombers popping up like Champagne bottles in nuclear Pakistan; or the melt down of the US economy with three of the five major investment banks disappearing and America the quintessential Mecca of capitalism embracing a half socialist economy after lecturing the whole world on the benefits of free markets, I am sure looking at all this I would either end up in a confession chamber in a church or worse: on a coach with a Freudian or Jungian analyst — preferably that looks like Sarah Palin – getting at least that part of my head examined that dealt with my foreign policy aspirations.

No! But this is not what we see inside the US. Instead we still see a public, a media and political elite that are so disconnected with ground realities, so obsessed with their own propaganda that the Presidential candidates try to outsmart each other in conceiving ever more aggressive military strategies for Afghanistan. Can you believe that they still think that the utter rot, the failure of the last seven years, can be managed by sending another three brigades to Afghanistan?

In reality whosoever wins the elections, America and the world needs a political leadership in Washington that can demonstrate wisdom and responsibility to fix up the economic mess, rejuvenate the markets and can take steps to restore America’s lost prestige. And preparing for a phased, ordered withdrawal from Afghanistan can be an important first step in that direction.

Many in this region will like the US to ultimately leave Afghanistan in haste and disgrace.

But this will further embolden the forces of medieval Islam and increase the regional chaos. America must be able to leave with a stable functioning system behind and if we reflect on all the disclosures, leaks and assessments of the past two weeks then the only way it will be possible is: by distinguishing between Taleban and Al Qaeda; by inviting Taleban to join a broad based government in Kabul and by working with both Iran and Pakistan to ensure the stability of a post-Karzai regime. May be David Petraeus understands that.