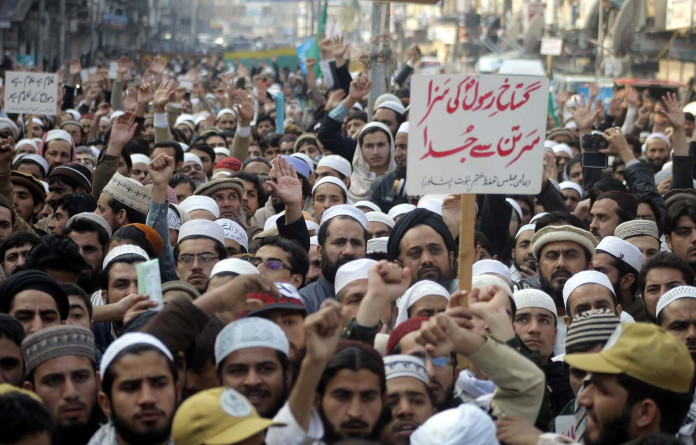 In a media driven and controlled by popular and often pedestrian national moods, it is no wonder that no one had the time to reflect that Jagdeesh Kumar’s lifeless torso was not merely that of a ‘man of no importance’ but was the battered face of the state of Pakistan THEY kept beating him with boots, bars and screw-drivers and left him only after someone pointed out that he is already dead. Jagdeesh Kumar, a 22-year-old, Hindu factory worker from interior Sindh was subject to mob justice in Karachi’s industrial area.

The mood was so intense that the police that had arrived was unable or unwilling to wrench his lifeless body from the crowd. What was his crime? Apparently, he was being lynched by his co-workers for insulting the Prophet of Islam (pbuh). Before we move ahead it may be helpful to remember that in his life, the Prophet (pbuh) never allowed his followers to harm anyone who insulted him. The case of the Bedouin who almost choked him in Masjid-e-Nabawi and his pardon for the family of Abu-Sufyan and Hinda following the conquest of Makkah are just two instances that come to my mind in a nano second flash. And if I start recounting it will be beyond the word limit my editors allow me for this column. I have spent years in civil services and media, interacting with the so-called political, bureaucratic and literati elite. And I know the kind of limits that exist in this country to talk about religion.

Ensconced comfortably within the drawing rooms of multi-layered villas, prompted and egged on with the help of few drops of smuggled whisky, in an atmosphere thick with references of Rushdie, Russell and Voltaire, and that too after ensuring that every face in the room is an old pal, some bold intellectual types do venture out to express their atheism, but even here any careless comments about Prophet of Islam (pbuh) are rare. These are the limits and we all know it.

So how realistic is the possibility that Jagdeesh, a poor worker from Sindh’s amiable Hindu community was uttering profanities against the Prophet (pbuh). That too while he was alone hundreds of kilometres away from his hometown? He had come to Karachi to enhance his daily income from US $1 to US $3 a day. Please give me a break! In reality these incidents almost always take place in the backdrop of an ongoing conflict between majority Muslims and a member of a minority be it Christian, Hindu or Ahmedi, it does not really matter. And an angry Muslim and his friends looking to take revenge for totally private agendas find it convenient to exploit the existence of Pakistan’s blasphemy laws.

A few years ago, while doing a TV programme from London, I had asked Jamaat-e-Islami chief Qazi Hussain Ahmed why we need such laws. And his answer was to contain the Muslim anger, to prevent the possibility of communal instability. I am a kind of history worm and I do understand where he was coming from. But if the last few decades make us any wiser these laws have only served to provide legitimacy to the biliary desires of goons and potential criminals. And why do we need blasphemy laws to protect the feelings of the Muslims in a 97 per cent Muslim country? If anything, such laws should only be there to protect the identity and self-respect of the minorities.

I can appreciate the stresses and strains that threaten the vulnerable identity of Muslim immigrants, say in Geert Wilders’ Europe. But if my sense of Muslim identity surrounded by a sea of 97 per cent Muslims all around is so insecure that I have to protect it through laws then something somewhere is seriously wrong. And in this age of global inter-dependence 24/7 news channels, Internet and YouTube this insecurity, this feebleness of heart and mind will only increase and with disastrous implications for communal stability. Come up with a better solution, Qazi Sahib, please!

But what looks religious on the face of it, is also driven by something even more primitive than it; and that is: the Pakistani belief in majoritarianism. And nowhere was it better reflected than in the antics of Pakistan’s burgeoning electronic media. We now have almost 50 domestic TV channels, with at least ten round-the-clock news networks, swarming with hundreds of anchorpersons and increasingly aquiline featured, gelled-haired ladies more ferocious than the rugged old men and all spitting fire with the buzz words of democracy, freedom of expression, rule of law, and the restoration of judges. But  like my friend Ghazi Salah-ud-din, a columnist in The News I wonder why none of them could fit Jagdeesh Kumar into a popular national agenda?

But I may offer an answer. Fareed Zakaria, a few years ago, jolted our consciousness with his provocative thesis: “The rise of the illiberal democracy”. It is a long discussion but in a nutshell, he argued that constitutional freedoms are separate and distinct to the principle of popular elections and majoritarianism. What we see in Western Europe and North America is a joint and parallel evolution of both concepts. But few in this country, while condemning Fox News and its juicy and dark portrayal of Muslims since 9/11 as a sinister American agenda, have reflected on the populism of Pakistan’s proliferating electronic media. So when Naeem Bokhari, a senior Supreme court advocate, was thrashed inside a court room, the lawyers, the media and the civil society brigades justified it by citing his unsavoury act of writing a letter against the former Chief Justice. When Arbab Raheem, the former Chief Minister of Sindh was thrashed inside the Sindh Assembly many in the media reminded the public that he being what he was deserved this. And when Sher Afghan, the former minister in the Musharraf-Aziz government was attacked by lawyers in Lahore, prominent TV anchors were showing clips of his utterances in favour of Musharraf to prove that the old man deserved it.

In a media driven and controlled by popular and often pedestrian national moods, it is no wonder that no one had the time to reflect that Jagdeesh Kumar’s lifeless torso was not merely that of a ‘man of no importance’ but was the battered face of the state of Pakistan. And while the demons of the majoritarianism were dancing naked, the rule of law was begging for the media’s suo motu notice. Ladies and gentlemen, there are issues beyond the restoration of judiciary!

Dr Moeed Pirzada, a broadcaster and political analyst with GEO TV, has been a Britannia Chevening Scholar at London School of Economics and Political Science. Email: mp846@columbia.edu